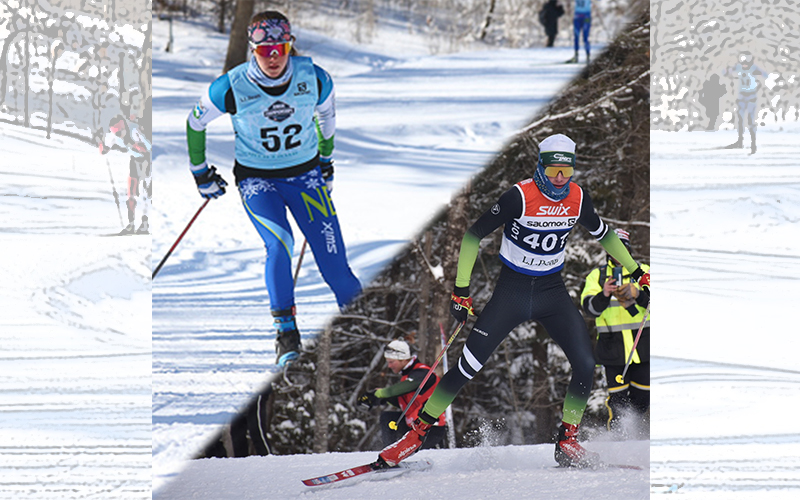 Harwood Union High School senior Ava Thurston, Waterbury, took home three gold medals in the junior national Nordic skiing championships in Minneapolis last week. She beat a field of 136 racers in the 5k freestyle race with a winning time of 14 minutes, 18.9 seconds on Monday, March 7. She followed that with another gold medal in Wednesday’s, March 9, classic sprint competition with a time of 3 minutes, 33.59 seconds and then won her quarterfinal heat with a time of 3:35.87. In the semifinals she won with a time of 3:28.59. On Friday, March 11, in the 10-kilometer race, Thurston dominated once again for the gold, taking first place with a combined time of 27:41.5. Before heading to Minnesota to compete in the junior nationals, Thurston took home her eighth individual state championship title.

“Winning a junior nationals race was really exciting and has been a long-term goal of mine,” Thurston said. “Coming into the competition I was feeling good about my fitness and recent performance, but many of my goals were more process based (such as pushing over the top of hills and skiing as hard as I could each race). To come away with the win and also know I had accomplished my non-performance-based race goals was really amazing and I'm super proud of how I raced in the skate 5k. I love the Minneapolis venue at Theodore Wirth Park, and it's a very hilly course with lots of transitions that I felt prepared for after our state meets at Craftsbury and Rikert, both of which are quite hilly courses.”

Sophomore Tabor Greenberg of GMVS also took home gold in the U16 freestyle race with a time of 13:37.4 and second place in the boys’ 5k with a time of 14:39. He got seventh place in the classic sprint. “He had an outstanding performance,” GMVS Nordic coach Colin Rodgers said. “His season has been phenomenal. This was the icing on the cake for sure.” He said Team New England did really well overall. “New England had a phenomenal championship, won all three age groups. We skied exceptionally well as a team.”

“One of the coolest things about this JNs [junior nationals] was seeing just how strong New England (and Vermont) is at cross-country ski racing,” Thurston said. “The last junior nationals was in Truckee, California, in 2020 and got cut short because of COVID. Since then, New England skiers have really only competed against other New England skiers. This year we came out strong and won the Alaska Cup (the award given to the strongest region) by a good margin. A lot of the skiers who raced at Vermont high school states placed very well in races with the top juniors in the country. Hattie Barker, who is a senior at MMU this year, has been one of my top competitors all season and she won both the D1 skate and classic titles. On Monday, Hattie and I took first and third in the 5k individual skate, an awesome accomplishment which shows just how strong Vermont high school racing is. Beth McIntosh, a freshman at Middlebury, was fifth in the U16 category for the 5k skate. We're lucky to have such competitive racing in the East because it helps prepare us for national level races, and I'm always impressed by how well Vermonters do on the nationwide stage.”

“I think the best part of junior nationals is the support of the New England team. Our wax techs and coaches put in so many hours of hard work to ensure we have the best skis and everything we need to perform at our best. It's so much fun to get to know the other New England skiers you have raced against all season, but maybe don't often see outside of the races. I was also really thankful to have my Mansfield Nordic Club coach Adam Terko out here working as a wax tech for Team New England because he plays a huge role in helping me plan my year-round training and supporting me at events and competitions.” Thurston hopes to race in Nordic skiing in college. She is also an avid cross-country runner.

But her Nordic season isn’t over yet. “The next races for me are actually Super Tour Finals/Canadian Nationals in Whistler, British Columbia, which I leave for in about a week. My coach Adam will be supporting me out there and I'm excited to get the chance to mix it up with some speedy older skiers!”