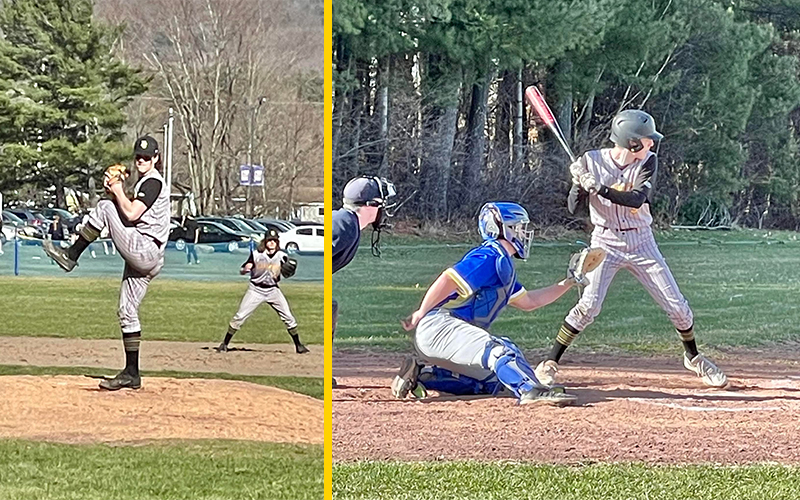 On Monday, April 11, Harwood’s baseball and softball teams traveled to Milton for their first games of the season. The baseball team narrowly defeated Milton, 5-4, while the softball team fell to the Yellowjackets, 12-0.

“Harwood played well for their first time on an actual field for this season,” softball coach Kevin VanSchaick said. “Couple of minor errors; two base hits. Jordan Hunter pitched the entire game with two strike outs, two walks. Milton earned the win with many well-placed base hits to the outfield.”

“[We] started off the game quickly getting the bases loaded in the first inning before a fly out to the pitcher ended our half of the inning,” Harwood baseball coach Dominic Moreno said. “[We] came into the second and Aidan Vasseur got us going with a walk and ended up scoring the first run of the game. We would go on to score two more runs that inning on three straight hits from Boone Maher, Adyn Oshkello and Nic Moran. Chris James was the starting pitcher. He went three innings on 66 pitches and recorded the win for Harwood. Jonah Halter came in for relief and went 3 1/3 innings. Milton came back in the bottom of the seventh scoring four runs to make it within a run and Nic Moran came in relief to strike out the last two batters to end the game. Nic Moran and Adyn Oshkello led the team with two hits apiece.”

Harwood’s boys’ lacrosse team netted their second “W” with a 12-10 win over Colchester. “After trailing for three-fourths, we finally took the lead with under six minutes left in the game. Jordan Grimaldi [scored] five goals, Jake Green three goals and six assists. Addison Dietz [had] 15 saves,” said coach Russell Bielke. “It was a real test for the boys as [they] played from behind almost the entirety of the game only to be able to tie it up and then to be able to take the lead and hang onto it. They all left everything on the field.”