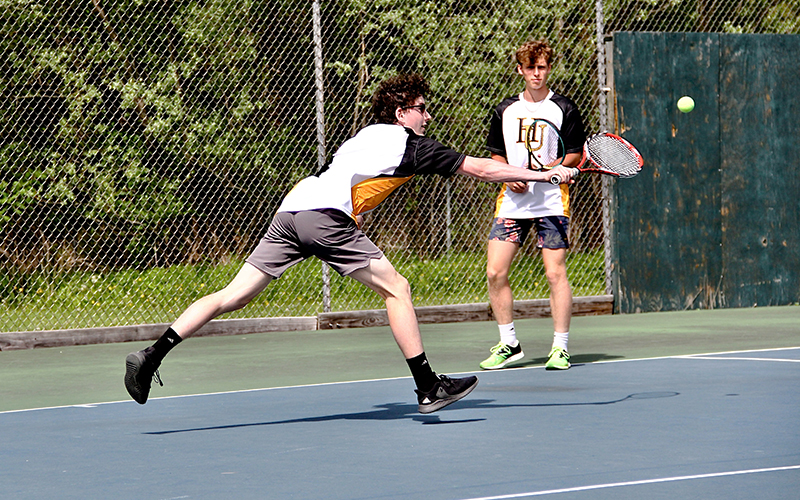 Harwood’s girls’ lacrosse team had a busy week. On Friday, May 20, they were defeated by Rice Memorial High School, 6-9. Anna Kudriavetz had two goals in the first half. Sadie Nordle and Maggie Aiken each scored twice. Goalie Abi Leighty had 15 saves.

On Monday, May 23, the Highlanders beat Lamoille Union, 19-14. “Harwood came out strong vs. Lamoille, gaining possession off the draws and taking a hefty lead during the first half,” said Harwood coach Hillary Wheeler. “Harwood led 9-2 at the halfway point. Harwood started the second half a player down due to a penalty late in the first half and Lamoille started to gain some traction. Lamoille was within striking distance at 22:04 in the second, the score was now 11 Lamoille, 12 Harwood. Harwood continued to go to goal and worked to build the lead back to five. Harwood made some adjustments defensively and worked together to take care of the ball and find the back of the net. The Thurston sisters, Ava and Julia, worked diligently together to gather a majority of the draw controls. Ava Thurston tallied six goals and younger sister Julia had a trio.” Anna Kudriavtez and Maggie Aiken each scored three goals, Libby Spina scored one, Ilyana Valadakis had two and Lindsey Boyden scored one.

The Highlanders played again on Tuesday, May 24, falling to Hartford 8-19. “Harwood played Hartford with the heart and hustle they display every game,” Wheeler said. “Harwood came out strong and worked hard to get through the double and triple teams. We stepped up to Hartford style of play which is much elevated than most of the teams we see. Harwood had netted five goals to Hartford’s 15 at halftime.  We worked hard for each 50/50 ball and didn't let up, even in the final seconds of the game we were in their offensive end.”

“We have been at least from my personal research the only team to score this many vs. Hartford this season,” Wheeler said.

Harwood finishes up the regular season with home games Friday vs. Stowe at 4:30 and Saturday vs. GMVS at 11 a.m. On Friday afternoon the team will celebrate its eight seniors.

Last Wednesday, May 18, Harwood’s baseball team defeated Randolph 13-3. “Jonah Halter started on the mound for us pitching a very efficient four innings on 49 pitches,” coach Dominic Moreno said. “He allowed two runs off of two hits and one walk with two strikeouts. Hitting was led by Nic Moran with three hits followed by two each by Adyn Oshkello and Gus Mosle. Nic Moran hit a grand slam for us in the bottom of the fourth. He had a total of seven RBIs on the day followed by Gus Mosle with three RBIs. We had a total of 11 hits on the day, 12 RBIs and six walks.

“It was our senior day, so it was great to get Sebastian in for his first match of the year! We also recognized River, Rohin and Artur,” Edwards said.