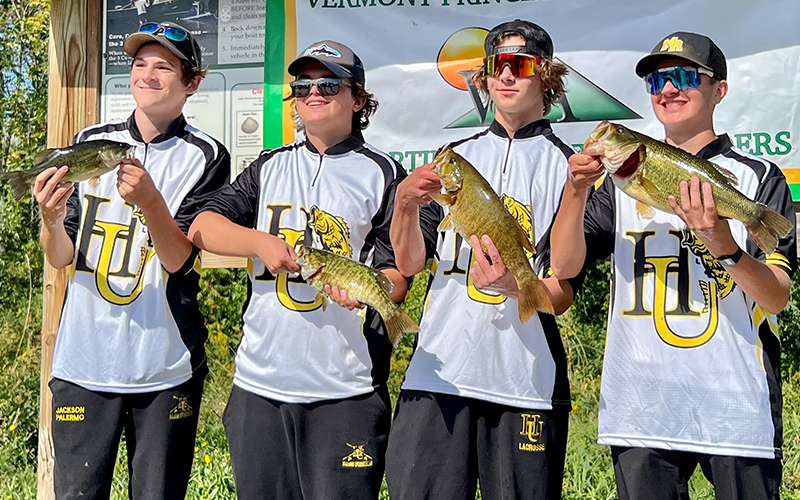 The Vermont state high school fall bass fishing classic was held in South Hero on September 18. The event featured 34 teams from 25 high schools around the state. “It was a beautiful fall day for the event and when the tournament concluded the Harwood Highlander teams would claim fourth place and the lunker, or heaviest weighted largemouth bass, of the event,” said Harwood coach Scott Green. “The team of Tyler Bravin, Eric Dessureau, Sid Ritzinger and Callan Mittler weighed in a six-fish limit of bass for a total weight of 16.67 pounds for the fourth-place finish. The team of Nate Conyers, Caleb Durand, Sean Geary and Jackson Palermo weighed in the lunker largemouth bass of the day that was caught by Nate Conyers. This trophy fish weighed in at 4.57 pounds and measured 20 inches. The team has really worked hard to prepare for the tournament and it really showed. The team also has a trio of freshmen of Maverick Misenko, Sawyer Popowicz and Acer Thompson that are really showcasing their skills on the water and during our practice sessions.”

Harwood scored two goals in the first quarter, the first by senior assistant captain Amy Cook, assisted by Molly Caffry. The second one was scored by Caffry, assisted by senior captain Chloe Joslin. Junior Kate Wilkseman was in net, and she finished the game with three saves and faced 11 penalty corners with her defensive unit. This is Wilkesman’s second shutout of the season. Harwood earned 12 penalty corners during the game, and the Missisquoi goalies totaled 12 saves.

“The objective of Saturday's game was to come out strong and maintain the same level of aggressiveness throughout the four quarters,” said coach Katie Martin. “It was just practicing the motions continuously until it became a habit, and our breakout was definitely stronger this game and it showed. Our midfielders were great this game. Really stepping up was senior center midfielder and captain, Kate Goodrich, who really is a leader on the field. She communicates switches very well, hustles to get back and always gives 100%. Our forwards were relentless in the circle which was perfect. We had two almost goals, one didn't cross the line fully, and another, which was batted out of the air by Caffry, was redacted as a foul called on blue, turning into a corner for Highlanders. It was awesome. I love that the girls are finally getting the competitiveness of the game and are always pushing themselves and each other. I'm hoping we can continue in all aspects -- the great work our team has been putting on the field for the season.”