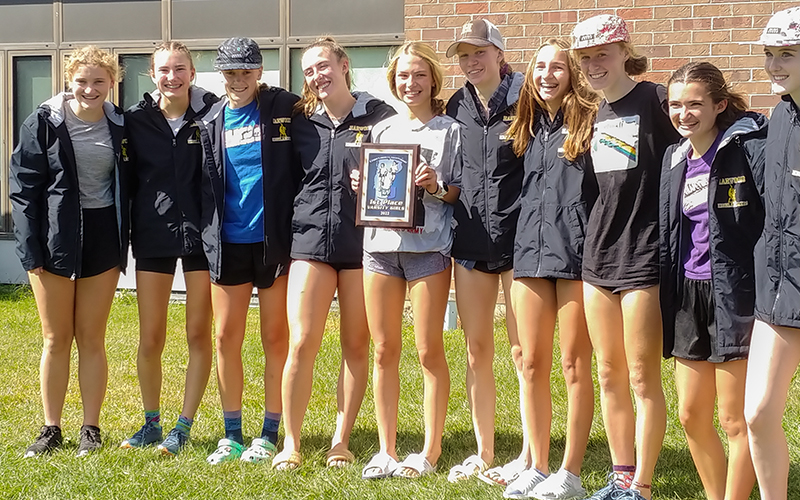 Before each cross-country race all Harwood Union runners do a cheer at the starting line. Most times it is 1-2-3 Harwood. Sometimes it is the Kerrigan’s army cheer, which ends with – “What are we going to do?” Then everyone screams “win.”

As the Harwood varsity girls were getting ready to do the 1-2-3 Harwood cheer Libby Spina asked her teammates, “How come we’re not doing the Kerrigan’s Army Cheer?” One of the girls replied with, “Because it ends with win!”

There is no way we are going to win agreed some of the girls. Spina said, “Let’s do it anyway.” And so, they did. Win that is,” Kerrigan said.

Tom Thurston, father of varsity runner Julia Thurston, observed the race at the halfway point. He remarked to Kerrigan “Boy, John, the kids are running well, I think you can win.” Kerrigan replied with, “The U-32 girls are so strong, the only way we can win is if they beat themselves and one of them drops and even if that happens it will be very close.” Kerrigan’s words turned out to be prophetic.

Just moments after their conversation, U-32s Ginger Long dropped from the course. Long is ranked No. 1 in the state and set a blazing pace through the first half of the race, Kerrigan noted.

“It was unfortunate for Ginger and the U-32 girls, they are a fantastic team and I am sure they will bounce back,” Kerrigan said.

The young Harwood boys’ team placed fifth in a competitive 16-team field. “We had two sophomores and two freshmen in our top four. Some of our older runners are still coming back from viruses they picked up during the beginning of the school year. They all hung tough today,” the coach said.

Freshman Pippa Diller (12) led the Harwood JV girls. She was followed by strong results from Hadley Andersen (14) and Rowan Clough (15)