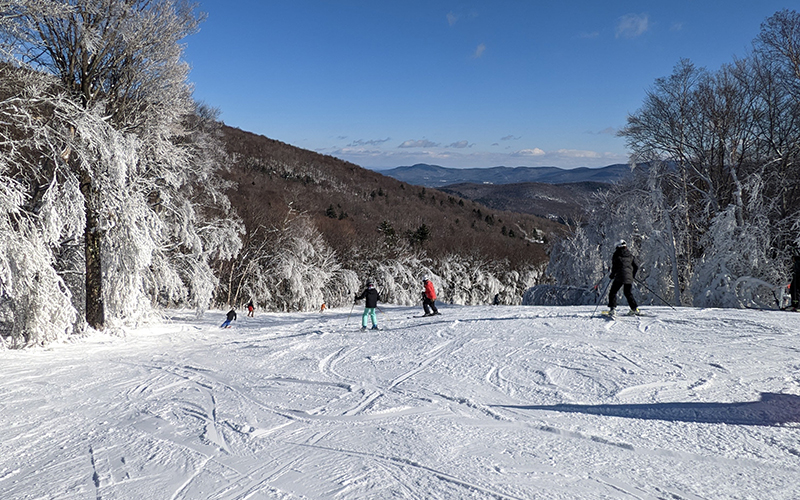 Opening day and the TV camera crews are right on it. To a skier, opening day is a big deal. The dive into the abyss begins anew.

Watching a first-time lesson in progress, I could not help but think that the breakthrough to “getting skiing” is much like the feeling that you get when you jump off a cliff into the water. The first couple of steps are easy; you are just running on solid ground, picking up speed until the last step. And then you can’t slow down, and you can’t hold on to solid ground, you release yourself into the air and the big drop into the water below.

On opening day, we start off thinking, “this should be easy.” After all, we’ve been here before. How hard can it be? I allow the edges to flatten and my balance to settle into a neutral, rolling stance. The skis are now searching for the fall line on their own. As the speed increases, the need for turning arises; hard snow and – edge -- where is edge? Oh right -- focus -- it is that time again. I know how to do this.

I mean, it’s not like some magic occurs and on their own, the skis go up on edge, high and early, rolling and following terrain. But wait. As a matter of fact, it is magic. It is the magic of focus: laser beam focus on the terrain, the technique, the advantage of any divot or roll, the power of the carving skis. The feeling is just like that last step as you leap from a cliff into the lake.

All is flow. When we were waterskiing in 74-degree sunshine and 63-degree water, it did not occur to us that we would be skiing firm snow two weeks later. Just like the weather, a skier needs to be in constant motion. Expert level motion is invisible, much like the poses in yoga. To the uninitiated, a yoga practitioner appears to be still; the pose is “held.” However, poses in yoga are held in a motion that is invisible to the observer. The yoga practitioner is moving – perhaps at the microscopic level. For example, the muscles reach out in two directions from the fingertips, expanding the chest, in warrior poses. In seated half-lotus position, the crown of the head is reaching upwards, pulling the spine into alignment.

None of this is new. Throughout the ages, centering has been sought after, Stoics and Epicureans alike approached these goals mainly through rehearsal and meditation. Like tennis players practicing volleys for hours, they used rehearsals to carve grooves of habit down which their minds would run, as naturally as water down a riverbed. Rehearsal, ritual, and repetition.

Although I would argue that in sport, at least in alpine skiing, there is no repetition. Every turn is different. Nothing is ever the same. In training, I would argue that trying to replicate a turn is a waste of resource. A good turn works if it follows the terrain and the fall line intimately and expertly -- effortlessly. But it cannot be repeated. If you try to repeat a successful turn, you are wasting valuable resources, both physical and mental. It would be better to practice flow and improvisation in every turn to have a productive training session.

These techniques reflect various intelligences. Educators speak of the seven intelligences, but those are just the ones that they have counted. These intelligences, you can pick them up like gumdrops. There are gumdrops like: Bode’s balance, Ligety’s inclination, Egan’s feel and flow. If these are the intelligences that you lack, pick them up! They are laid down in the snow in arcing, connected turns and yours for the taking. Improvement is the proper use of time The clock is ticking so use it wisely. Adjust a boot buckle and absorb a new and better habit.

One of the most talented and hard-working skiers to come from The Valley, Brandon Dyksterhouse, is the new Alpine technical and high-performance consultant at GMVS. Dyksterhouse is a five-time All-American at UVM, an NCAA champion in GS and has 40 FIS wins and 90 podiums in his career. He was lead coach to Mikaela Schiffrin who was undefeated in WC SL during his two-year stint as coach. Congratulations to GMVS to have “D-money” in the house! Ski fast Gumbys!