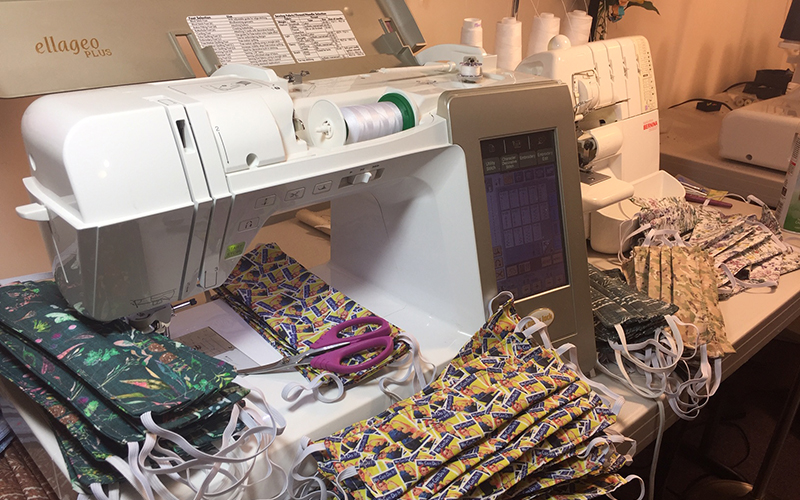 “It’s meditative and it’s been a blessing. April is usually my quietest month. I come to work every day and I enjoy the monotony of it. It grounds me,” said Bridget LaMell of Reign Vermont.

LaMell, Waitsfield, is a clothing designer and maker and a longtime local entrepreneur who has pivoted to making cloth face masks from her small, red cottage at the south end of Bridge Street Marketplace along the Mad River.

“Sewing is therapy for me. When I feel like I’m floundering, I start sewing. If I’m anxious, I sew. It’s been that way for 30 years,” she said.

A friend of hers suggested that she consider making washable cloth face shields and she did some research, watched tutorials and started making samples. She texted pictures of the samples to her friend and others.

About that same time, Annemarie Furey at Product Think Tank in Waitsfield was ramping up her efforts to make reusable and washable masks for health care workers.

“It all came together at the same time Annemarie was gearing up. She and I were talking about our efforts and the difference between our masks. She was using wire for nose pieces and mine are for covering the masses!” LaMell said.

At the end of March, she put out a post on social media and to her regular customer base via email and the response was overwhelming, she said. An issue for many mask-makers has been access to elastic for the earpieces, but LaMell, who is regularly producing clothing, had a good supply at the beginning. The orders haven’t stopped since her outreach on March 29.

“Two weeks ago, I was getting here at 7 a.m. and leaving at 6 p.m. I kept saying to myself, if our health care workers can be doing what they’re doing on the front lines, I can do this. I feel like I’m helping and that makes me feel good,” she said.

After her initial supplies of elastic ran out, she had a bit of a lull where she scoured the internet and eBay in search of more. During that time orders were piling up and people – accustomed to living in an Amazon Prime world – wanted to know when things were going to ship.

LaMell explained the elastic situation and had to tell people over and over that she didn’t know there was going to be a pandemic.

As supplies come in, she’s continuing to pump out masks. She’s working production-style for efficiency. She has had some help from local seamstresses, but mostly she’s a one-man factory in her little, red cottage.

She’s filling orders as fast as she can and she’s now having her fabric made specifically for her.

When she’s waiting for supplies she is experimenting with other models.

“The ones I’m making now are simple. I wanted to get these out to get people covered so they could go to the grocery store, post office and to get gas. I’m working on some other models with the nose and chin guard. When you do the same thing every day you’re always thinking of a better way to do it,” she said.

LaMell has been sewing and making her entire life. She has made bike bags and totes and other bags, selling variously out of small retail outlets and larger chains such as REI where she had her products in 105 stores at one time.

In 2011 with no warning, REI stopped carrying her product and a week later she got flooded by Tropical Storm Irene and had 3 feet of water in her shop.

“I ended up refocusing. I’d been so consumed by that REI account that I didn’t have any time for creativity,” she said.

With the encouragement and support of her partner, Chris Pierson, she decided to start doing what she wanted to do which was to design clothes.

“Chris said, you’ve got to keep going. It’s who you are. And that’s what I did. I wanted to be a clothing designer and I started making skirts, dresses and pants. It’s been great. I only do consumer direct either online or at the market,” she said.

But right now, she wants to make masks and she is still pumping them out, covering faces in The Valley and beyond. Visit www.reignvermont.com for details.