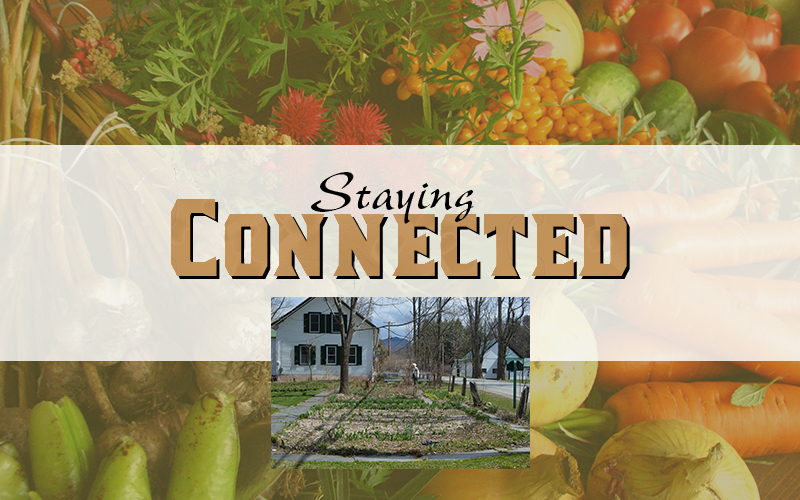 “Eighty or 100 years ago, everyone had gardens,” said Huguette Abbott, who moved to Fayston in 1937 before her first birthday. “A lot of people had chickens and some had pigs and calves too.”

EATING FROM THE LAND

Abbott’s mother was raised in Montreal, “but she turned out to be one hell of a gardener,” Abbott said. For her family of seven, she grew corn, peas, carrots, beets, cucumbers, wax beans, parsnips, pumpkins, squash and at least 50 pounds of potatoes every year.

Of course, there were tomatoes. Abbott said that her mother started both tomato and cabbage seeds in a cold frame on Town Meeting Day. Once the plants were established, they were sold for 50 cents a dozen.

“‘Organic’ kind of makes me laugh,” Abbott said. “Back then, to fertilize, we had lime, phosphate and cow manure. About as organic as you can get.”

Longtime Waitsfield resident Ruth Pestle was born in 1932 and inhabits the same Bridge Street home where she was raised. Her family of five was also fed from an enormous garden.

She said that her mother, born to an Irish family in 1899, often had to harvest the corn crop early, before it was plundered by raccoons.

Potato bugs were also a nuisance back then and, as a child, Pestle was paid 1 cent per can of insects collected from the plants. They were drowned in kerosene.

Pestle’s mother ordered Burpee seeds and started some plants on windowsills in their house, until her brother sourced a large, indoor light fixture. She baked the soil to sterilize it.

Pestle’s mother sold regale lilies, gladiola bulbs and phlox roots on the roadside and by mail. She called her business Pestle’s Posies.

Pestle still grows many of the flowers that her mother did many years ago, as well as a few new varieties. She tends tulips, roses, delphinium, monkhood, coreopsis, honeysuckle, daisies and a tulip tree, which are rare in The Valley these days.

When Pestle’s mother was bedridden in her last years, she asked Pestle to move her phlox beds closer to the window where they could be better seen and Pestle happily obliged.

Both Pestle and Abbott grew up without the easy luxury of storing food in electric freezers. Pestle’s family had a stone cellar where they stored potatoes and apples on shelves, carrots and beets in covered crocks and an endless supply of canned tomatoes, applesauce, string beans and pickles.

Even eggs were stored for several months in crocks, submerged in a substance called water glass or sodium silicate. “The yolk was flat when you broke it. It wasn’t standing up like a fresh egg, but it wasn’t spoiled either,” Pestle explained.

She said that when her family purchased an Amana freezer in the early 1950s, “That was really exciting because it meant that we didn’t have to can everything.”

Abbott said that her mother would sew ballerina skirts from printed flour and grain bags and that the introduction of Wonder Bread meant that fewer loaves were baked at home.

“I was about 10 years old when mayonnaise was a new product. At 10 cents a quart, it was a bargain. We liked it so much that we stopped using mustard, but then the price went up.”

Abbott also saw the introduction of margarine or oleo. She said that her family would mix it with cream and salt to achieve butter-like consistency and remembers how angry her father became when the family revealed to him that it was an imposter product.

Pestle’s family shopped at a store owned by the Bisbee family for staples like flour and sugar, as well as canned Campbell’s tomato soup and spaghetti, rice, penny licorice, dried codfish and oatmeal. “My father didn’t think he’d had breakfast unless he had hot oatmeal every day of the year,” she said.

Both Pestle and Abbott remember Sir Walter Raleigh, a peddler who knocked on their doors, offering spices and medical supplies like Bag Balm, aspirin and vitamins.

Sourcing food also meant that “you took advantage of whatever was around,” Abbott said. With her siblings, she hunted partridge and squirrel after school. “When we got three or four, my mother would cut them up, roll them in flour and fry them with a side of gravy.”

Abbott’s family also hunted deer and rabbit, and raccoon was not uncommon either. “You would soak it overnight in vinegar, then boil it, stuff it and bake it. It’s very greasy, but it tastes OK,” Abbott said.

“You also picked every wild berry you could find,” she added. As for wild strawberry preserves, “You can’t beat it.”

Abbott remembers dining on roasted chicken, fried and scrambled eggs, home fries and milk gravy atop boiled potatoes. “We were soup people,” she explained. Her family saw a lot of vegetable soup, sometimes with meat.

In the spring, they ate potatoes and peas with cream. Abbott said that biscuits prepared in a woodstove are far superior to those baked in a gas oven – “like night and day.” When coffee was not available or Abbott’s family could not afford it, they burned toast and used the crumbs as coffee grounds.

Pestle recounted her mother preparing chicken dinners in the woodstove. She chopped the heads off on a block, dropped them into scalding water to remove the feathers and, “of course, they always flop around a while after they’re dead,” she said. Her mother covered the chicken with biscuits and gravy.

Abbott said that when Sugarbush was coming to life, urban residents from New York, New Jersey and Rhode Island arrived without gardening skills.

Fred Gilbert, a resident of Waitsfield’s Evergreen Place who bought land on Center Fayston Road in the late 1960s, said, “A lot of people didn’t want to get their hands dirty.”

Pestle said that she sees a revival of gardening with organic methods in addition to greenhouse production and farmers’ markets. “I’m pleased that people have had this revival of growing things,” she explained, “and stores like Mehuron’s provide variety.”

“But we use the stores a lot,” she said. “It’s bittersweet.”