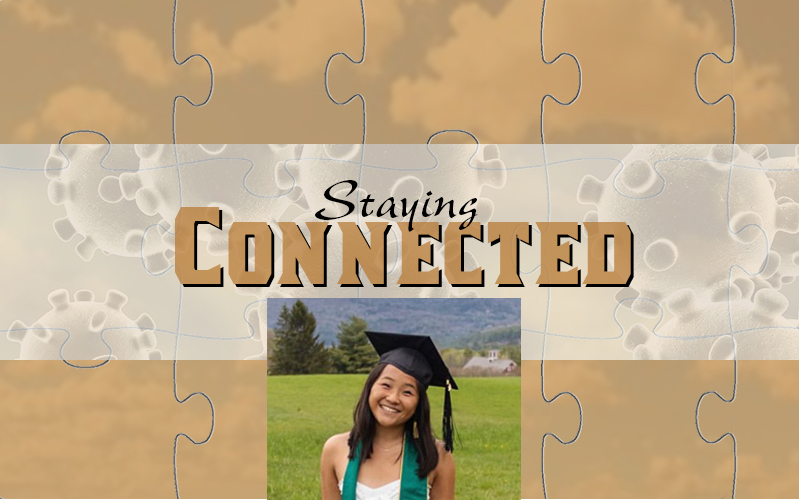 Emmy Mumford, recent graduate of the University of Vermont, knew she wanted to pursue psychology ever since her post–high school gap year, which she spent working in a Taiwanese orphanage. Many of the orphans that Mumford worked with had lost their parents in the 2004 Boxing Day tsunamis. “Seeing those kids and their resilience is what made me realize that people, even in tough situations, are innately resilient. The idea of being able to help them foster and nurture that resilience is what made me want to pursue psychology further,” said Mumford.

On March 17, 2020, Mumford graduated with her bachelor’s degree in psychology. However, the celebration, and the semester leading up to it, was nothing like Mumford could have anticipated.

“It’s been an isolated time,” said Mumford, reflecting on her last semester as a psychology student, much of which she spent quarantining with her family at their home in Waitsfield.

The transition to online learning was smooth, all thanks to the professors, said Mumford. “Our professors were incredible. I give them so much credit because to change the curriculum was extremely difficult. They did an amazing job adjusting,” she said.

Still, some aspects of Mumford’s curriculum couldn’t be transferred to an online platform. Mumford’s favorite psychology class involved biweekly visits to Chittenden County Correctional Facility, a routine that became obsolete in the face of the pandemic.

“To go from being inside a prison twice a week to taking the class behind a computer was really tough. That was my favorite class and it turned out to be one of my least favorite classes toward the end because I missed the connection aspect of it,” said Mumford. “The interaction with the inmates was really fun and interesting.”

When UVM transitioned to remote learning, it took pressure off students by allowing them to switch from letter grading to pass-fail grading. Thus, staying academically motivated became even more of a challenge for seniors like Mumford.

“It was tough to find the motivation at the end,” said Mumford, although she had devised a strategy to keep herself on track. On Sundays, she would write out all her assignments for the week and spend subsequent days checking items off the list.

“I did a kind of Pavlovian positive reinforcement training on myself. When I finished an assignment, I would go do something fun after, like watch a show or make something to eat,” said Mumford.

The silver lining to Mumford’s at-home semester was getting the chance to slow down and enjoy old routines. “I love that we’ve started to have family dinners again. At college, you get into this routine of eating while you’re studying or eating ramen while watching Netflix,” said Mumford.

Still, the semester was strange and the strangeness most prevalent when Mumford was finishing her final exams. “There’s always something about a final exam, even when you’re a sophomore. You get up and leave the classroom and feel like a weight has been dropped off your shoulders. But this year it was really weird because when I finished my final exam I just closed my computer,” said Mumford. “It was strange to not have that experience of getting up and walking out of class and saying, ‘I’m officially done with college.’”

Like the quiet closing of a laptop to mark her last college exam, a modest event marked Mumford’s graduation from college. Instead of gathering among hordes of other students and watching a flood of graduation caps speckle the skies, Mumford celebrated by tuning into UVM’s online graduation speech and slideshow before having a small family celebration at her house.