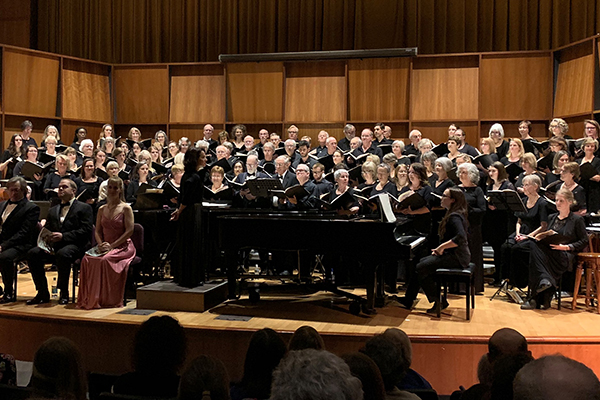 The 100-person strong chorus took the stage at Harwood Union on May 4 after a sold-out performance at the Flynn Theater the night before.

The concert opened with Randall Thompson’s “Alleluia,” a short, sonorous requiem that was at once soothing and captivating. It was conducted by Erik Kroncke, one of the soloists for Orff’s piece. Kroncke is the conductor of the South Burlington Community Chorus.

Orff’s “Carmina Burana” is based on poems from a medieval collection of the same name and revolves around themes of love, fortune, spring, pleasure, lust, gambling and gluttony. The text is written in a fascinating combination of Medieval Latin and High German.

In addition to the complex text, which the combined choral groups mastered, the music for the piece runs through multiple musical times (4/4, 2/3, etc.) some tricky, including one in which the two pianists, Alison Cerutti and Samantha Angstman, danced masterfully with each other, accompanied by percussionists Brian Johnson, Evan Peltier, Dov Schiller, Peter Schmeeckle and Avi Bauer. Timing in “Carmina Burana” is a critical component and the combined groups were incredibly well-rehearsed and successful in their execution.

It’s not a short work – it runs to over an hour, but time flew, especially when punctuated by the soloists who sat in chairs in front of the chorale, standing to perform.

When the opening number, “Fortune, Empress of the World,” was repeated at the end of the performance, it brought down the house as the audience sat stunned for a second before rising to its feet for a lengthy standing ovation.