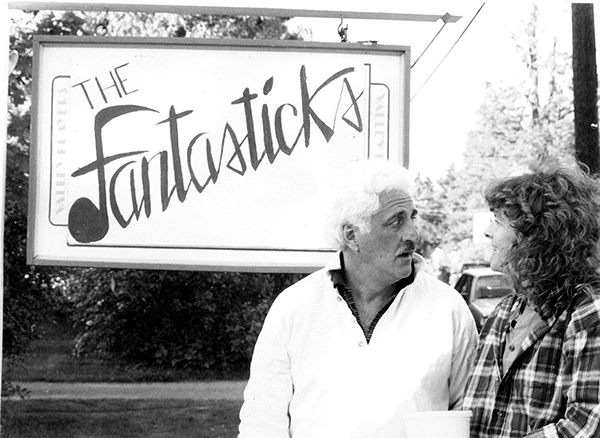 Forty years is a long time. Not many things in a small community can sustain themselves for 40 years, but the Valley Players community theater has done just that.

In 1979, the Valley Players put on their first production, “Harvey,” at Fayston Elementary School. This was directed by Edsel Hughes from Montpelier who agreed to direct for the price of gas. While this 1979 production was the beginning of the current 40-consecutive-year run, there were some theatrical organizations that preceded it.

Soon after that initial 1979 production, the group decided to produce “Cactus Flower,” but its members had no home. Their search led them to Odd Fellows Hall, which is among the oldest and most historic buildings in Waitsfield Village. It was known as “The Old Brick Church” when it was constructed in the mid-1830s. Odd Fellows Hall was originally one story with a high peaked roof and a series of eight magnificent arched windows along each side of the nave. Like many of the buildings in the village, it was designed and built under the scrutiny of the Richardson family. The Odd Fellows purchased the building in 1903, added a second floor to accommodate meeting space and constructed a flat roof, squaring off the windows. They rented the ground floor to various enterprises over the years, one of which was the Valley Players. Thanks to some great negotiating by David Steinman and others, the Valley Players moved into the space two weeks before “Cactus Flower’s” opening night.

Determined to make Odd Fellows Hall the Valley Players permanent home, the late Mitchell Kontoff negotiated the purchase of the bottom floor of the hall. He coordinated the building of an addition in the back that gave the theater a set-building space and a green room for the actors. The Valley Players community theater is in the enviable position of being able to hold auditions, rehearse, build sets and store costumes all in their own space. This is fairly unique in the community theater world.

Even before the 1979 production of “Harvey” and the 1968 creation of a summer theater, Odd Fellows Hall housed local performances. The Nellie Gill Players, a Vermont-based company, performed here in the early 1920s and 1930s and utilized much local talent. The late Fletcher Joslin of Waitsfield reported that silent movies were shown here and “a lady from Warren came down and played the piano in accompaniment.”

The Valley Players Community Theater has continued that tradition of making its space available for all sorts of activities and has hosted several concert series, birthday parties, other organizations’ plays, community events ... even a wedding. The theater is also the home to KidsAct, a children’s theater group run by Ruth Ann Pattee, Fayston.

Visit www.valleyplayers.com for more information and to buy tickets.