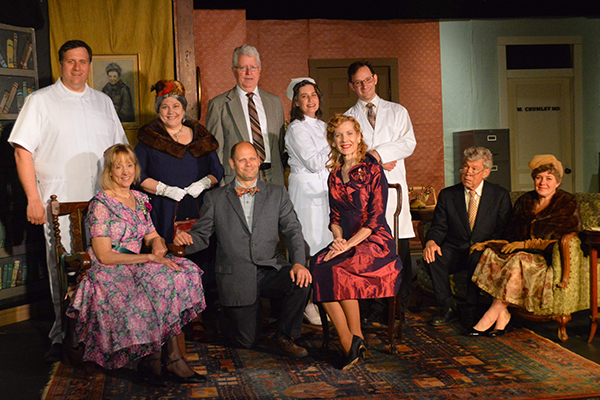 In the 40th year of the Valley Players, the theater group will be producing shows they have done before, starting with “Harvey,” by Mary Chase, which hit the stage originally in 1979.

The main character, Elwood P. Dowd, an older gentleman played by Doug Bergstein, is a man in a high-class family who suddenly becomes the black sheep after insisting he has an imaginary friend. Elwood’s friend, a 6-foot white rabbit named Harvey, travels around with him to his various social events and is frequently engaged in conversation.

Veta, Elwood’s sister played by Rachel Natvig, is a lady of society who frets over her family’s reputation after her brother begins his imaginary friend fanatics. Veta worries the sudden appearance of Harvey is brought on by heavy drinking and their mother’s recent death. After Elwood becomes too much to bear, Veta decides to have him committed.

In a comical onset of scenes at the sanitarium, family and friends go on the hunt looking for Elwood and Harvey. Veta is left trying to clean up a mess before the family secret breaks out into society.

After a wild goose chase to retrieve Elwood and Harvey, Veta is asked to choose between accepting Elwood as he is and having him committed to cure his imagination. This play portrays the endless tale of loving family no matter what – warts and all – or in this case white poofy tail and all.

Showtimes for “Harvey” start May 31 and run to June 16, Friday through Sunday at 8 p.m. with Sunday matinees at 2 p.m.