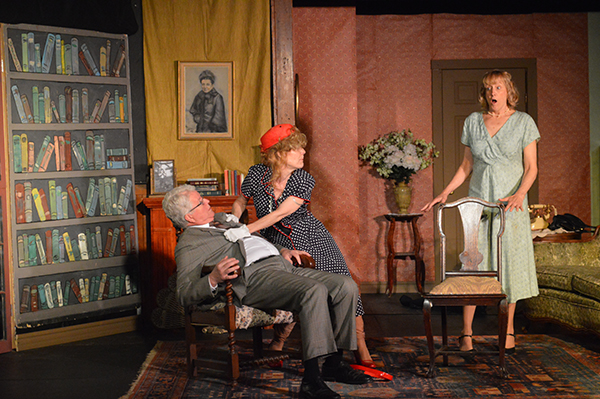 In a hilarious three-act comedy, “Harvey,” a production put on by the Valley Players, opened this past weekend with a big turnout.

“Harvey,” a play that originally hit the Valley Players’ stage in 1979, was brought back to the stage for the 40th anniversary of the Valley Players. The 11-member cast brought on an onslaught of laughter with the theatrical representation of how trying family dynamics can be.

Elwood P. Dowd (Doug Berstein, Warren) plays a man who enjoys drinking with newfound friends, including an invisible 6-foot white rabbit named Harvey. Elwood’s sister, Veta Lousie Simmons (Rachel Natvig, Northfield), is an upper-class woman who worries about her and her daughter’s reputation in society when Elwood starts introducing Harvey to people around town. Veta believes Elwood is suffering a psychotic break when he starts seeing Harvey and she tries to conceal her brother from society.

Veta, to hide her embarrassment for her family’s pending reputation, tries to have Elwood committed to a sanitarium. In a mix-up at the sanitarium, the medical and personnel staff become confused with which individual is crazy, or if they are all mad in a mad house.

After a wild goose chase to track down Elwood and Harvey, the lead doctor at the institution, Dr. William Chumley (Jack Bradt, Winooski), starts to believe that Harvey the rabbit is real.  Elwood’s family and friends believe the only way to cure Elwood is to inject him with a serum that will allow him to return back to normal and make him forget about Harvey. After conversations with both a cab driver and Dr. Chumley, audience members will realize that being normal is not all it’s cracked up to be.

This play encourages community members to explore the idea of normalcy and, through comical dialogue, if being seen as smart and sophisticated rules over one’s happiness that they find in everyday life.

The play runs through June 16 with shows on Friday and Saturday at 8 p.m. and a Sunday matinee at 2 p.m.

This is the first production in a yearlong celebration of the Valley Players 40 years of community theater.