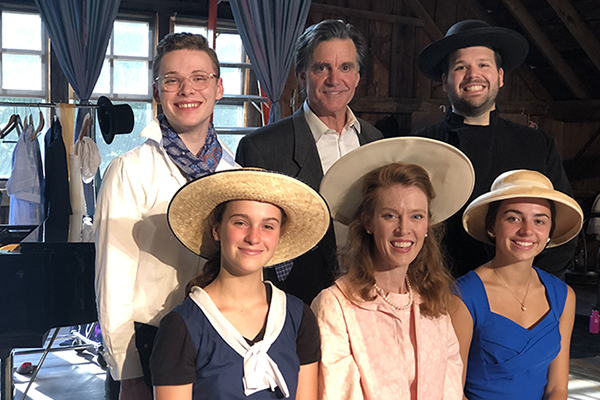 From Broadway classics like “The Pirates of Penzance,” “The Man of La Mancha,” “A Little Night Music,” “Gypsy” and “Oklahoma!” to lesser known works like “Violet,” “Bat Boy: The Musical,” “The Robber Bridegroom” and “Lucky Stiff,” The Skinner Barn summer theater has brought professional theater to the Mad River Valley and the greater central Vermont area for the past 19 years.

This summer, Boynton has conceived a show titled “Better by Two,” an evening of 18 classic Broadway duets, introducing a new cast of performers to the Skinner audience.

Elisa Van Duyne, a Broadway veteran of revivals of “42nd Street,” “Beauty and the Beast,” “Finian’s Rainbow” and “110 in the Shade,” brings a gorgeous voice and tremendous skill and experience to her debut at the barn. She and Boynton headline an evening that also features three new performers – Emma Greenwood, a talented senior at HUHS who is destined for a long career on the stage, Matthew Skelly, a Waterbury native who brings a lovely baritone to his roles, and Burlington native Billy Ray Poli, a wonderful performer with a big, beautiful tenor voice that fills every corner of the barn.

“Better by Two” opens on Thursday, July 18, and runs Thursday through Sunday evenings for two weeks, closing on Sunday, July 28. All performances start at 8 p.m. Tickets can be purchased online at theskinnerbarn.com or call and make a reservation at 802-496-4422.