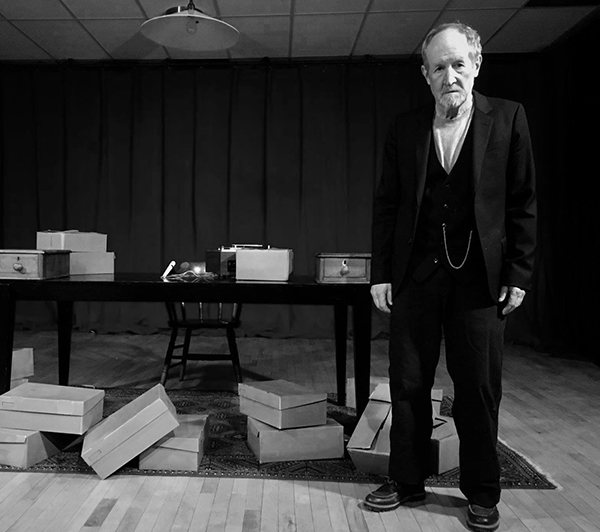 Phantom Theater performers Rob Donaldson and Daniel Forlano are presenting solo shows back to back on the same nights (July 26 and 27) that at first glance may seem an incongruous match, but on further thought create a unique combination of mental gymnastics (the first show) and the physical as philosophical (second show).

Donaldson is performing Samuel Beckett’s “Krapp’s Last Tape,” a play that theater critic Michael Billington said “Never ceases to astonish.” According to director Bill Lattanzi (who has built a playwriting career and is making his directorial debut with this show), Beckett’s most personal play “has always been looked at through the lens of absurdity and existentialism, though I see it as something far more personal. Krapp tells the story of a man reviewing his life — an old man not unlike many, comfortable in his habits, ruing his mistakes, wondering what new project might lie ahead … I think the audience will see a Beckett they haven’t seen before — human, funny, warm, simple and moving. Rob is simply sensational in bringing it to life.”

Fortano’s show, “Poggio Does a Backroll,” that follows “Krapp’s Last Tape” features slapstick and vintage clowning when Poggio attempts a backroll, which brings chaos. Though billed as a children’s show, it is a sophisticated work that uses clowning, dance, acting, comedy and improvisation that Fortano says, “come together like a jazz band personified.” Fortano wrote on his website, “A mind that reflects the body is a mind in tune with Nature.”

Go to www.phantomtheater.org for directions to the theater. Reservations are not required and instead of tickets the theater board invites audiences to donate what they wish.