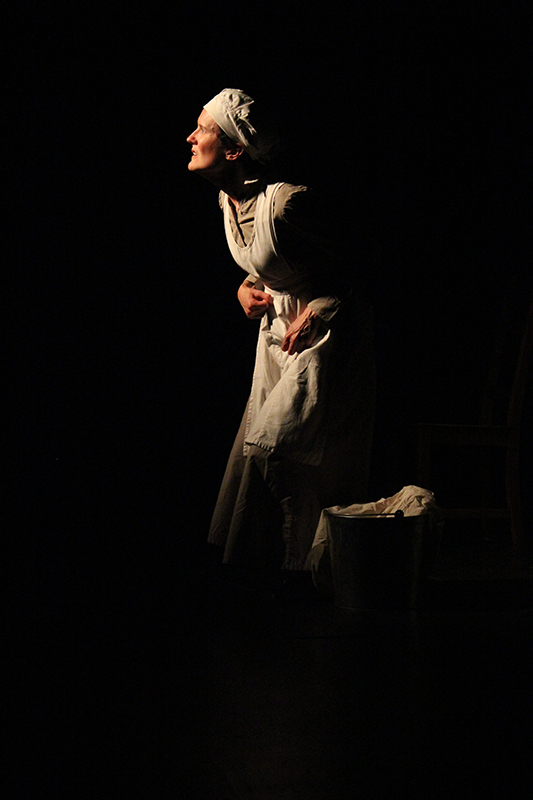 The rare power of theater to give voice to those who have been silenced will be showcased this weekend when Phantom Theater presents Erin Layton in the Vermont premiere of her one-woman show “Magdalen, the Play” Friday through Sunday, August 2, 3 and 4.

Through the stories of eight characters, Layton explores the incarceration of thousands of Irish women and girls whose behavior was deemed immoral by the Catholic Church. Under the supervision of the Sisters of Our Lady of Charity, the inmates were forced to work in the Magdalene Laundries and were severely abused. The shocking conditions continued deep into the 20th century, only coming to light in 1993 when a mass grave containing the discarded remains of hundreds of female bodies was discovered on church property in Dublin.

In 2010, Layton traveled to Dublin to conduct research for a potential play. While standing on the grounds of a locked and abandoned laundry, she met a “charming Irishman.” He had grown up across the street from the convent, and as a young man, had even driven a truck for the sisters. Now running a hostel on the premises for recovering addicts, he agreed to take her into the building. Down a narrow hallway, he led her into the lobby of the laundry itself. It appeared eerily untouched, a picture of the Virgin Mary still gazing down on what Layton described as “a place of stillness and darkness.” The generosity of her companion had given her a visceral window into the world of her play, and his shame over his complicity in the building’s dark past became embodied as her piece’s narrator.

Debuting in 2012, Magdalen has played to sold-out houses and rave reviews from New York to California and across the Atlantic to Edinburgh, Scotland’s, prestigious Festival Fringe. Over seven years it has gone through numerous iterations. Layton noted that she is “a perfectionist. I’m very tough on myself to show the differences in characters through shifts in voice and body and gesture.” The focus on craft creates indelible individuals.

“The Magdalenes’ innocence was completely destroyed at the prime of their lives,” said Layton. Their suffering has become her art and mission.