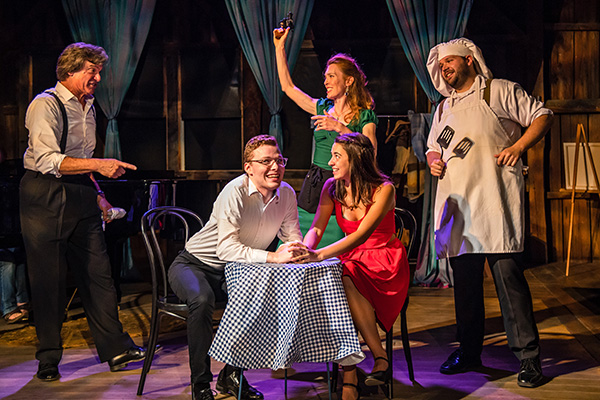 “Better By Two,” a night of Broadway duets put on by the Skinner Barn, Waitsfield, gave proof to the adage that good things come in pairs.

The Friday, July 26, show had a full barn in attendance for a night full of comedic and heartwarming songs. The cast of Elissa Van Duyan, Emma Greenwood, Billy Ray Poli, Zoe Blackman, Peter Boynton and Matthew Skelly put on a two-act play that delighted audience members. The evening was staged and directed by Boynton himself.

Songs from “The Fantasticks,” “Into the Woods,” “Annie Get Your Gun,” “Titanic,” “Kiss Me Kate,” “Wicked” and more were brought to life as performances were back to back, never skipping a beat.

“For Good,” from “Wicked,” sung by Greenwood and Duyan, raised goosebumps as the pair’s harmonic voices echoed off the Skinner Barn’s beams. Duyan’s hypnotic voice was also showcased in a duet with Boynton in the classic “Anything You Can Do” from “Annie Get Your Gun,” as the pair faced off in a laughable sing- and dance-off, demonstrating all of their musical and dancing talents.

The production also had humorous tidbits, such as Boynton and Poli’s rendition of “Plant a Radish” from “The Fantasticks,” dressed as older gardeners who enjoyed their garden escape, noting it’s easier to understand a radish or kidney bean rather than offspring.

A whole company singing “Friendship” from “Red Hot and Blue” showed a picturesque restaurant with Greenwood and Skelly on a date as the rest of the cast prompts a friendly and amusing date night atmosphere.

In Poli and Greenwood’s take of “All ‘er Nothing” from “Oklahoma!” the pair, equipped with costume and accent to match, put on a cute showing of a couple’s trifles with exclusivity. Indeed, in the Skinner Barn’s production of “Better By Two,” Boynton and cast brought it all.

For more information on upcoming events at the Skinner Barn, visit www.theskinnerbarn.com.