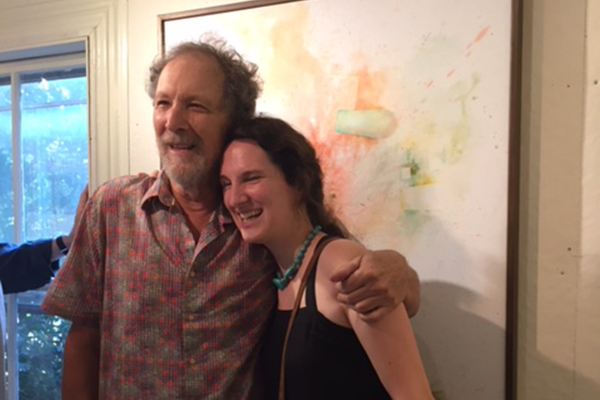 I was among the large crowd that showed up at the Madsonian Museum next to the covered bridge in Waitsfield for Carl Bates’ exhibit of new paintings on August 12. Entering the gallery was like entering a vortex of color – an array of bright greens, blues that you could dive into, bold orange and other flamboyant colors – that flooded the senses. The paintings ran the gamut from large abstract works that incorporated collage to much smaller, exuberant studies.

Bates was there to greet the many friends who showed up. He said after, “I can’t imagine feeling better about showing my work. I liked what I was painting, but when people came in and were ecstatic about it, I kept thinking, holy mackerel.”

One painting after another was marked sold. All proceeds from the show will either be sent to the Vermont FoodBank or to the American Cancer Society (Bates has recently gone into remission after cancer treatment).

Bates moved to Warren in 1974 after meeting architect Dave Sellers in 1972 and working on one of his house additions as an itinerant carpenter with a mutual friend, Duncan Syme. Sellers offered him a studio and he accepted. He had started out at the Yale School of Architecture but soon shifted to art. His mother was a painter and was supportive of him. Bates laughs, “I could talk her into the idea that what I was doing was worthwhile even though it wasn’t.”

He began painting wall-size canvases that seemed to match his robust personality. He was married at the time to Patty Chittenden Gutierrez from Costa Rica. She had two sons from a previous marriage, Juan Carlos and Sebastian, and in 1982 she gave birth to Larissa, who is now a recognized artist in New York.

Bates said that he never felt particularly on the verge of self-sustaining remunerative success, even though he did exhibit in a few one-man shows and in numerous group efforts. Throughout those early years he was supplementing his income by working in the building trades, which wasn’t a sacrifice as he “enjoyed putting things together.”

“When my kids started being of an impressionistic age and expected something out of me, I felt an obligation to them and so I stopped painting,” he explained. “Another reason I stepped away from painting was that I had started to reproduce myself and that seemed like a dead end. I wanted to challenge myself in a different way.”

Six years after Patty’s death, Carl married Tracy Martin, who had come to perform at Phantom Theater, and after the birth of their son, Lucas, he started a stonework company called The Pharoah Stoneworks. The walls and patios and other works produced during that time have a sculptural bent and are perceived by many as art. Bates also tried his hand at acting and has been a longtime contributor to Phantom Theater.

After he and Martin divorced, Bates married Lourie Campbell in 2007. He returned to painting a decade ago, and he and Lourie decided to spend their winters in Palm Springs, California, and eventually bought a house. He set up a desk in the garage and started painting small canvases. He saw the work of his youth as “old stuff of an ilk, very contained in a stylistic framework.” But the main thing was his old passion was rekindled. He soon found himself dabbling with some of the old, larger works and breathed new life into them.

“In the past I would have thrown them out,” he said. “Once something grabs me, that’s my way in. I follow my way into them.” Color is important. “I try to use the colors that I haven’t used before. I find that I gravitate toward the ones I’m familiar with.”

The new works vibrate with life, and for the first time they feel personal. His daughter Larissa is a huge influence on him. “Her presentation of herself in her work, which I am now doing, has been very liberating,” he said. “Mine is not as good as hers. She has really honed her craft, where she handcrafts all the detailed figures in her work. I guess what I want to be known for is getting an idea that amuses me … amuse is a broad word.”

“One that holds your interest?”

Bates began cancer treatment two years ago. When asked if having cancer directly affected his art, he replied, “I think it has to do more with the appreciation that the treatment helped me regain the mental and physical energy it takes to actually pursue creativity of any sort with a vengeance.”

Bates now has a studio in Warren and a better one out West. When asked what’s next he said, “I’ve been working much more hourly than I ever did before. I’m free to do it. In fact, I started back painting yesterday.” He smiled. “Sitting in your studio and doing something you enjoy is not really work.”

He admits that Vermont will always be home. Seeing the stream of visitors filing into the museum on August 12 was proof of the devotion of those who are fortunate enough to call Bates a friend.

Bates’ paintings will be on display at the Madsonian Museum through Labor Day. Museum hours are noon to 4 p.m. on Friday, Saturday and Sunday.