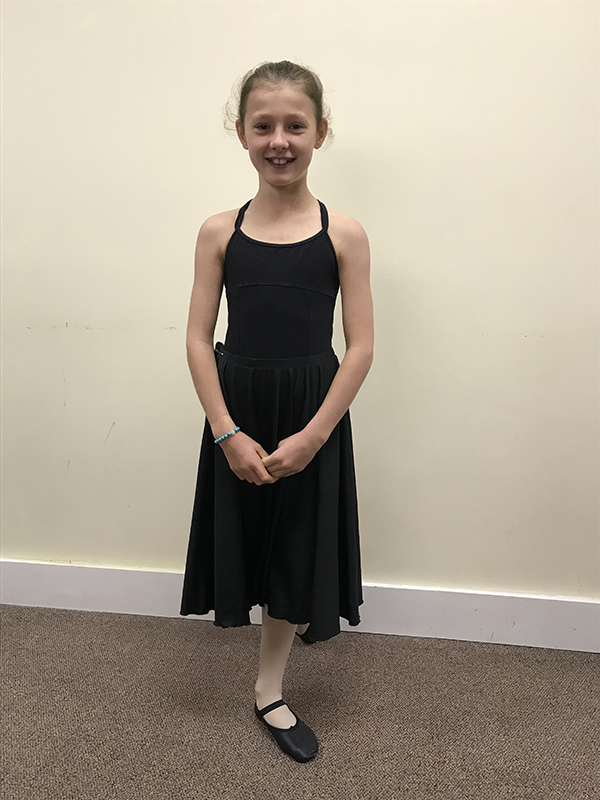 Ten-year-old Adelaide Sullivan, Waitsfield, started dancing when she was 3 years old and now dances six days a week, including one day spent rehearsing for her role as Clara in the Albany Berkshire Ballet’s production of “The Nutcracker.”

“The Nutcracker” will be performed on the weekend after Thanksgiving at the Flynn Theater on November 30 and December 1. Sullivan is one of three Vermont dancers who will perform this lead role during the three productions. Her performance is Saturday evening.

Adelaide is the daughter of Christine and Dan Sullivan. Her mother brought her to The Valley Reporter this week for an interview where the 10-year-old sat bouncing on a bouncing stool as she explained her audition and dance history.

She said she wasn’t nervous about the audition, which took place a month ago. She said she felt she’d had a good audition but “didn’t full-on think I’d get it.”

Parents aren’t allowed in for auditions so the young dancers need to maintain their composure and confidence when they lace up their ballet slippers.

Adelaide and the other dancers rehearse with professional dancers from the Berkshire Ballet and she really likes the interaction with the professionals as well as meeting new people.

She is most excited about the costume she gets to wear for the party scene, a big flowing dress. In addition to the party dress, as Clara she’ll spend a fair amount of time in her nightgown too!

In terms of dancing skills, she’s fairly confident about her ability to play Clara, but she said there’s one lift (when she is lifted into the air by another dancer) that is not rehearsed until the dress rehearsal on November 29 when the professional dancers are working with the local dancers. Dancers who are not used to being lifted need to learn to become comfortable being hoisted into the air and spun around. Luckily for her, though, she and another dancer often practice being lifted by one of their instructors at the Stowe Dance Academy where they take lessons.  Her 64-pound weight makes her a great practice partner for someone learning lifts.

Asked why she started to dance at age 3, she said when her older sister Wanda started dancing at age 8 she wanted to try it too. In addition to classical ballet, she is taking classes in jazz, lyrical dance and tap and she is a member of the TRIP Dance Company (Technique, Rehearse, Implement and Perform) which involves learning three to four dances with her peer group in a week, plus weekly rehearsals in January and February, culminating in three competitions in Boston.

She is already dancing on pointe (on the tips of the toes) and has appeared in several other roles in “The Nutcracker,” including as a reindeer, a clown (twice), an angel and a party child (twice).