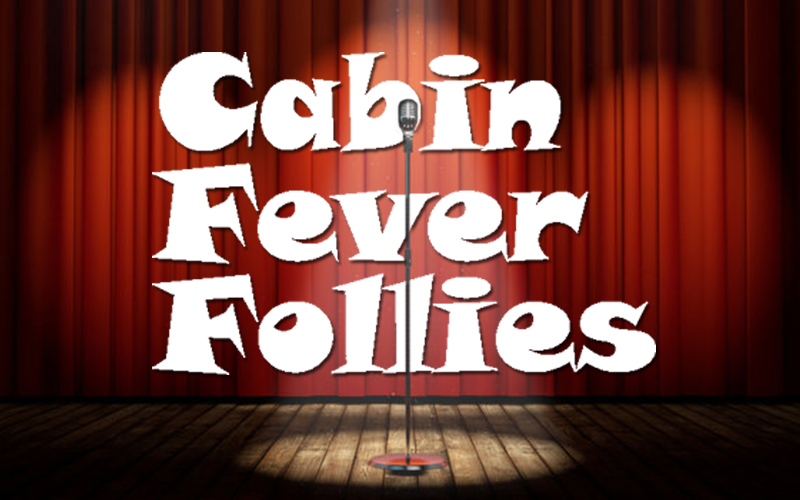 Cabin Fever Follies is back. Virtual auditions for this popular local talent show are complete. Raisinettes, the bare-legged trash-bag wearing characters who normally dance across the stage between acts holding messages from the audience, have been chosen.

This year’s rendition of Cabin Fever Follies will be entirely virtual and entirely free, though donations to the Valley Players are encouraged.

The show will take place over Zoom on Saturday, March 20, at 7 p.m. Zoom connection information will be available on the Valley Players website and Facebook page. According to Cabin Fever Follies organizer Doug Bergstein, there are many acts to look forward to this year, both musical and comedic.

Last March, right before the much-awaited 2020 version of Cabin Fever Follies, the Waitsfield-based theater closed its doors to the public. “Back then, we couldn’t figure out how to make it happen so we just canceled for the first time since 1995,” said Bergstein.

Over the next few months, the set from the theater’s last play remained on stage, collecting dust as Valley Players board members Ruth Ann Pattee and Doug Bernstein puzzled over how to keep local theater alive during a global pandemic.

A revival was necessary: not only had the theater lost revenue from ticket sales during the initial pandemic lockdown, but it had also missed out on its annual craft fair, which normally takes place in October, and serves as the theater’s financial engine.

Eventually, Pattee initiated the “theater-in-your-home” movement. Since October, The Valley Players Theater has put on four Zoom shows: “Pygmalion,” “A Christmas Carol,” “A Life Altering Event,” and “The Importance of Being Ernest.” “We’ve gained a lot of confidence over the past six months because we’ve been doing so many Zoom productions,” said Pattee.

More intimate scenes are harder to execute in Zoom theater, however. For instance, instead of acting out a live action smooch, actors will blow kisses to each other from separate screens.

These shows did come with a few technical difficulties, said board members. According to directors, there were several instances in which audience members un-muted themselves during the show, causing a raucous interruption. Once, an audience member turned on their camera before the show without realizing it, putting themselves on full couch-locked popcorn munching display before the audience.

Valley Players board members have completely avoided musicals, as overlapping singing across screens does not work well. “For Cabin Fever Follies, everything is self-contained. As long as I’m playing the music in my own space, it’s fine. You get into trouble when you are overlapping with other people broadcasting,” said Pattee.

However, these at-home Zoom shows have come with unique benefits too. To start, Zoom plays have revived the theater. “We’ve reached capacity a couple times,” said Pattee, explaining that the Valley Players Zoom account allows a maximum of 100 participants. “When we get full in the Zoom meeting, people get bumped over to the Youtube channel and can watch the show live on Youtube.”

Additionally, the Zoom performances are less of a time commitment for the actors. “Usually when we do live performances, we do three weekends, or nine shows. Sometimes for musicals we do 12 shows. But with Zoom performances, we’ve only been doing three,” said Pattee. After doing three live shows, Valley Players board members upload the show to Youtube for people to watch later.

Moreover, it has allowed actors to come together from far and wide. “We’ve had actors participating from Texas, Virginia, Massachusetts, New Hampshire and Vermont,” said Pattee. “It’s been super cool because it opens it up to so many people!”

Pattee even suggested that the Valley Players will continue to use Zoom after the pandemic is over. “It’s a great tool for those beginning rehearsals, when you’re just talking to the cast, or working one-on-one,” said Pattee.

However, all Valley thespians, actors and directors alike, are looking forward to the day that they can perform in person again “One of the biggest differences with Zoom performances is that there’s no reaction from the audience for the actors,” said Bergstein. “The actors are in complete isolation and silence. There are no chuckles, no laughs.”

While there will be no audible reactions from the audience at Cabin Fever Follies this year, Valley Players board members plan to keep the chat box open for the audience to react via text to each performance. “We’ve been very lucky that we have such strong community support,” said Pattee.