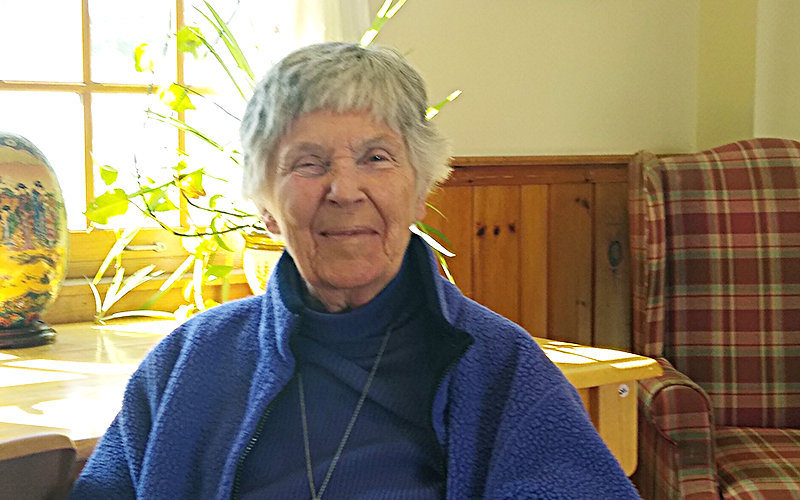 Waitsfield resident Helen Myers was born in Montreal. She was married to Lawrence (Larry) Myers for 51 years. He was a professor of education at Johnson State College. They had two sons, Dan, a carpenter in Alaska, and Lawrence (Larry) a professor at Dartmouth Medical School.

Helen’s family moved to New York where she went to high school and went on to get a master’s degree in education at University of Chicago. She taught for 10 years in elementary school and at Queens College. In Vermont at the age of 50, Helen’s education took a turn when she earned another master’s degree in plant and soil science at UVM. She didn’t stop there. At 64 years of age, she got her PhD in botany. She went on to teach biology at St. Michael’s College.

How did she come to change her focus from education to plants? An avid gardener, Helen explained. “I wanted to understand how garden plants respond to the environment. For example, how does light affect when strawberries flower and fruit?” Helen has continued her love of gardening and is now thinking about the next growing season.

Helen has maintained her love of travel over the years. This included a trip to China and Tibet in 2003. In 2018 at the age of 86, she drove alone winding her way through the United States into the Canadian Rockies and from there to Alaska where she met up with her son.

Living the Vermont life, she loved to ski. “When I first started skiing, there was no Sugarbush. In the summer of 1948 and before it opened, I remember taking a single chairlift up Mad River Glen.”

Helen recalled an event at the Bisbee farm. “It was VJ Day in 1945. The war was over. My uncle lit the shed on fire to celebrate the end of the war.”

Helen had an experience that most people will never have. In 1968, she was a two-time winner on the game show, Jeopardy. She explained, “I wrote them a letter. They invited me to Rockefeller Center to take a test.” She was then invited to be on the show. “Art Fleming was the host when I was on the show. That was long before Alex Trebek began his hosting run in 1984.”

She lost in Final Jeopardy on her third show. She had to know who the entertainer was who had the highest income in 1916. Though she missed the question she shared with a smile, “It was Charlie Chaplin.”