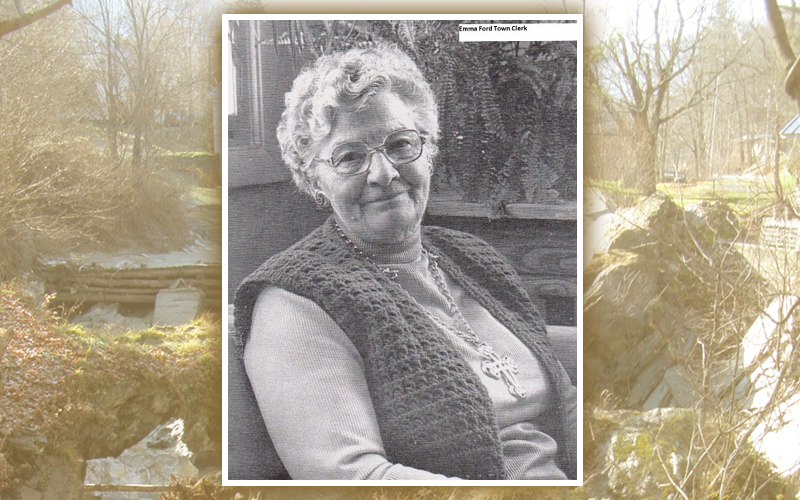 Pearl Gaylord Vargas told me I should write about Emma Ford of Warren. I started by posting a request for information on Front Porch Forum.

Barb deLima answered with an email. “As I understood it Emma was town clerk for 49 years and handpicked Reta Goss who has now been town clerk for 44 years, if I’m counting correctly. Quite a legacy for Warren.”

Ginny Roth responded too: “Of course, I remember Emma. John and I met her on our arrival in town in 1961. She was the first real estate agent in The Valley. The table in her immaculate kitchen was the Warren town clerk’s office. She supported Warren United Church, always attending the Sunday services and firmly expressing her opinions. On her death she left the church a generous donation which the church has designated as the Emma Ford Fund. Dick Wein painted her portrait which hangs in the town clerk’s office.”

Pam Lerner said: “I remember Emma Ford as a feisty person with curly grey hair who ran the town from her house on Route 100, across from the northern entrance to Warren Village. Long before computers, she seemed to have everything she needed right there. She wrote town records by hand, in a beautiful, clear, copperplate handwriting.

“When I moved to Warren in 1972, I went to Emma’s to register to vote, in her kitchen of course. She clearly wasn’t pleased to have another foreigner coming in but gave me the forms to fill out. She went over them carefully but stopped when she saw that my mother was born in Bennington, Vermont. Emma looked up at me over her glasses; looked me full in the face for the first time. Then she gave me the Freeman’s Oath and immediately after the last line “…the freedom for which it stands” she looked me square in the eye and said, ‘Now you’re not going to vote Democrat, are you?’ It was clearly more an order not a question.

“A local architect came in while I was there, someone she greeted cordially. After I, a person with a Vermont mother, was properly registered she turned to the architect and told him her new bathroom was finished and invited him to come see it. I tagged along and she proudly showed us her new bathroom. It had red walls (or was it black?) around the vanity with large mirrors over the sink. The mirror was surrounded with large round lights like theater makeup lights. You never would have guessed this was the dream of the grey-haired town clerk from Warren.”

A local architect came in while Pam was with Emma? Interesting. Hmmm. I picked up the phone and called Dave Sellers.

I asked him to tell me about Emma Ford.

He laughed so hard he could barely breathe. “Good Lord where do I start?” It took a while for him to collect himself. “How much time do you have?” He cracked up again. “Here’s a good one. So, I go into her kitchen and she showed me how to draw deeds up for Prickly Mountain. In her living room she had files of stuff too, and her husband was sleeping on the living room floor.

“I was sitting at the table watching her go in there to get some things. She stepped over her husband, Lawrence Ford, and as she came back, she gave him a kick and said, ‘Wake up. Wake up.’

“Emma’s husband ran the old bobbin mill. One time she was at her house and she got a call that he’d got caught in the flywheel of the old steam engine. It’s still there. A gigantic wheel which had a steam engine that was fueled by the scraps of the bobbins that were being milled for the wool industry. Back when there still was a wool industry. She told me the story that he was stuck in the flywheel and was spinning around. So, they shut it down and called and asked Emma if she wanted to come over.

“She said, ‘No, no just put him in the car and tell him to drive home.’ It’s not a very long drive from the bobbin mill to her place. She told them he should come through the covered bridge. This was before Route 100 had been fully paved.

“Then she got a call from a neighbor who lived by the covered bridge. Because everybody knew each other. He had run the car up on their lawn and was really dizzy. I guess from being stuck in the flywheel. They were on a party line with everybody listening.”

(Young folk: A party line, also known as a multi-party line and shared service line is a local loop telephone circuit shared by several homes. It was a cost-effective way to bring telephone service to rural areas. But the bottom line is that everyone could eavesdrop on each other.)

Dave continued, “They propped her husband up and he went down the road a bit further and he pulled up on somebody else’s lawn. This guy was really dizzy. So, they called her again and Emma said, ‘Just send him on home.” She waited and waited and waited. Finally, she learns he pulled off in front of The Warren Store and staggered out and sat on a bench. She got another call on the party line. Apparently, he was delirious. But Emma was more worried about their vehicle. She kept asking, ‘Who’s going to pick up the car?’

“A bunch of them brought Lawrence home and laid him down on the living room floor, because that’s where he would rest when he got back from work. Someone did manage to bring the car back to her. That’s when she finally settled down.”

Emma was always interested in the Warren Fourth of July parade which has spanned 73 years. Warren has only missed one year, taken off due to – what else? —the COVID-19 pandemic. But Emma was the person who initiated a change in the flavor and tone of the event. She asked Dave to get everyone who was building up at Prickly Mountain to come up with a float of some kind.  She had a high school marching band and a horse-drawn carriage already booked. The Prickly crowd came up with a moveable basketball game that followed the horses.

Dave said, “Emma wouldn’t ask the kids in the band to walk behind the animals. But when she stuck us back there, she knew perfectly well, we would have to dribble the ball around the piles of dung. It was a move that added to the other complexities of the game. The crowd loved it!”

More than one person has told me Emma had a pew at church she considered “hers.” Nobody else dared sit there. But Mrs. Ford also had a benevolent side, as she left a portion of her estate to the Warren United Church of Christ.

Thank you all for taking us back. If you have an idea for a subject or a memory to share, please email me at This email address is being protected from spambots. You need JavaScript enabled to view it..