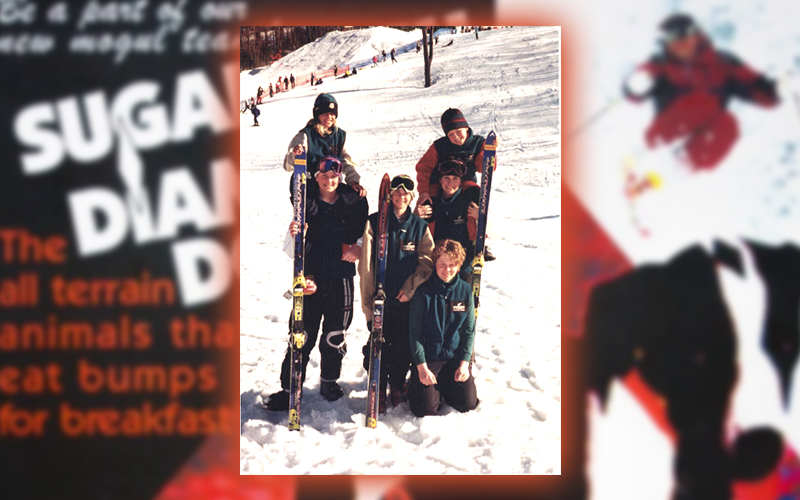 Roy Tuscany is the founder of the High Fives Foundation. I’ve known him since he was a child. He asked me a simple question, “Don’t you think it’s interesting that most of the founding members of the Diamond Dogs became very successful?”

I’d never thought about it before but having been a math and science teacher for many years I should have. There were lots of school initiatives that came and went in my career. One stood the test of time. We called it Character Education. Though it morphed to have the name social-emotional learning, it’s pretty much the same idea. Turns out children can be taught to have grit, perseverance, courage, honesty, generosity, kindness, fairness, commitment, a positive attitude and tolerance for others. Educators do a good job with this in classrooms. But I’ve long believed that such life lessons are absorbed more intensively when learned in context in the real world. Especially in groups where the children are doing something that they love and value.

I hope that some of you will write to me about an experience you or your child had here in The Valley that facilitated personal growth. In the meantime, I want to tell you about a special time in my two oldest sons’ lives.  It all began when coach Kevin Wry started the Diamond Dogs freestyle team at Sugarbush.

It was 1993 and my children had been skiing at Mad River Glen. First at the Cricket Club and then with the race team, which they loved. Bruce was 10 and Jonny 7. But they met and became friends with a charismatic young fella named Kasey Wry. KC some call him. He’s coach Wry’s son.

In a recent interview with Kevin, he talked about the year 1993. “I had the lead groups of Snow Blazers, and they were very high-quality skiers. And I wanted something to challenge them to go to the next level. So, I went to Paul Brown at the time, who was the director of the ski school and said, ‘We ought to start a freestyle team and start competing against other mountains.’ And he was all for it. He said it was a great idea.

“We took the band of the Snow Blazers that I had and then we added a few… characters to the program.” (He laughed because he meant the coaches he got to sign on.) “Kasey was finishing up with his racing with GMVS and was looking for something else to challenge him. He was always more of a free skier anyways. We developed it. Then some of Kasey’s friends joined on.

“We took them over to the B Championships in Holiday Valley, New York. (He laughs hard.) We had six or seven that qualified for the championships that first year. We had a good time over there. Interesting experience. They had terrific rain and then the next day it froze solid as a rock. They went out with chain saws and cut up all the snow. (We both laugh.)

“But we did well over there. And that’s when we ran into Andy Woods. He was skiing then as a solo guy out of Smuggler’s Notch. I recruited him and said to come on down to Sugarbush and ski with us. He did. (Andy would go on to win the U.S. Open.)

“We got Anna Eberle from Mad River which didn’t have this kind of a program. We had Matilda Urie too. Her parents worked at Sugarbush. Bruce Hyde and Jonny Hyde (He nodded to me because they are my children.) And my daughter Lindsey Wry. That was the solid basis for the program.

“A rag-tag group of kids … and coaches too. (Laughter)

“I remember going to the level one coaches’ clinic at Waterville Valley with Nick Preston and we built a little mogul course. We were all skiing the moguls. And they were amazed. They said, “Wow. You Sugarbush coaches can ski. You can really rip it up.”

I said, “Roy asked me if I thought it was interesting the original group of kids turned out to be so successful in life. He thought maybe you coaches taught them way more than skiing.

His eyes twinkled. “I don’t think it was so intentional. But when you look at the numbers. If we averaged 35 kids a year since 1993. We took last year off for COVID but over 22 years. Over 700 kids. Doctors, lawyers, you name it. It’s true they were great kids and there was good parenting involved.” He winked. “But we might have had a little something to do with how they turned out.”

Kevin said, “I want to be sure to thank head coaches Doug Nolan “The General,” John Smith “Smitty,” Joey Normandeau. And Aaron Hersey has been a coach for over 20 years. It’s because of those guys that we were able to keep the program going.”

I said, “The other thing we should mention is how grateful they were that you got them a room.

“The Dog Pound. It was a place they could call their own at the mountain. Everyone enjoyed that. A lot of good stories come out of The Dog Pound. During lunch … I forget who the skier was but some of the kids duck taped him to a pole. Wrapped him in duct tape. Always something going on.

“It’s been a good ride. Great kids. Great kids. I think it’s time for me to pack it in. At my age. But it’s been great. But I’ll help them out. I’ve always been there. More than anything had fun.”

Remember to share with me an important Valley influence in your child’s life. You can email me at This email address is being protected from spambots. You need JavaScript enabled to view it..

Mary Kathleen Mehuron lives in Waitsfield and writes novels. Her new one will be out July 11, 2023.