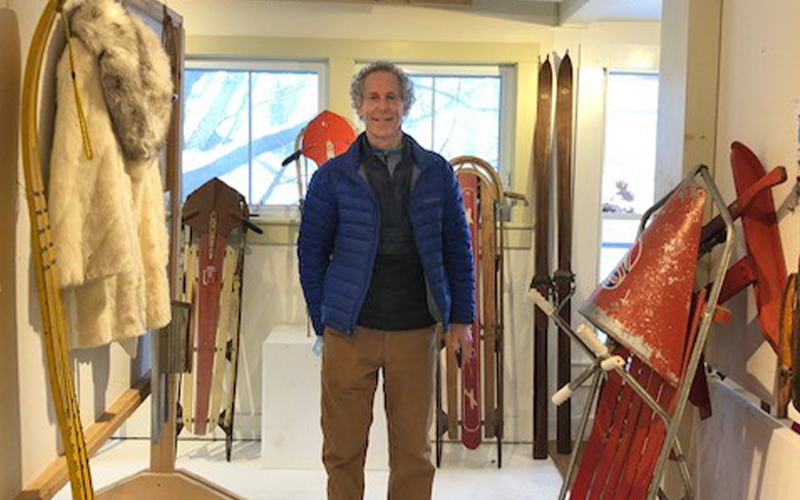 A new exhibit featuring antique sleds is open at the Madsonian Museum in Waitsfield.

The exhibit includes sleds collected by the museum for years as well as sleds loaned to the museum by Dan Reicher, Warren, who is a Syracuse native with an affinity for the winter pastime.

Living in a snowy city with a house perfectly placed atop a steep hill, sledding became an integral part of Reicher’s childhood.

“I often say that as a young kid the blizzard of 1966 when we had 5 to 6 feet of snow and were out of school for a week was one of the greatest moments of my life,” he said.

Reicher’s love of sledding continued into his adult life as he collected sleds from friends, family and, occasionally, the trash.

He loaned his personal collection to friend and founder of the Madsonian Museum, Dave Sellers, Warren. Sellers is a fellow sledding aficionado who designed and manufactured his own sled, the Mad River Rocket.

The Mad River Rocket was a result of “a handful of restless adventurers in Warren, Vermont, who sought a way to set free the snowy hills of Vermont,” per its marketing materials. The sled was patented in 1987 and has been sold all over the world.

The exhibit features two rooms for sleds, one dedicated solely to the Mad River Rocket. There will be a non-stop movie playing which will include video of the early stages of the Rocket as well real footage of the sled in use.

In addition to the Mad River Rocket, the exhibit features a number of antique sleds including an early precursor to the snowboard, one of the half dozen sleds loaned to the Madsonian Museum by Reicher.

One of those is the Snurfer, which was invented in 1965 by Sherman Poppen and patented in 1966 as a surf-type snow ski.

“I got a very early version of one for Christmas and it was essentially the forerunner of the snowboard. There were rough spots for your feet on the board with a curved-up end like a ski and you’d stand on it and there was a rope you’d hold onto and you would snurf,” said Reicher.

“I think it will be fun for people to see the exhibit because hundreds of millions of us have been watching the Winter Olympics and watching sleds of various forms,” said Reicher.

The two friends don’t plan on hanging up their sleds anytime soon. Sellers even modified the Mad River Rocket to account for his double knee replacements.

I just love this, you know? Being down close to the snow having it. You know, big, big snow clouds in my face. I love the speed and I love the fact that you can do it almost anywhere. It’s just pure joy,” said Sellers.

The exhibit runs through the beginning of April.

Blow is a student in UVM’s Community News Service which pairs student writers with local newspapers.