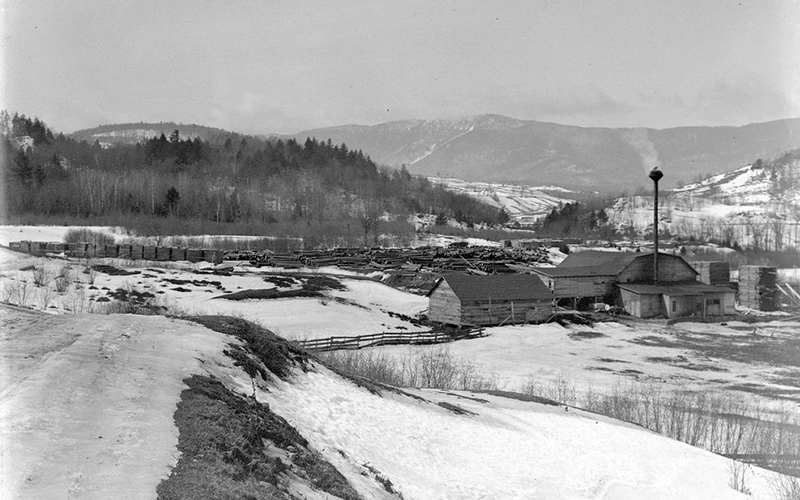 It’s been hard to put my finger on exactly what was going on in the Mad River Valley in the early part of the 1960s. This is because my research has revealed a study of two separate cultures. A tale of two cities in Dickensian terms. For some it was the best of times, for others . . . perhaps not. Parallel lives of locals trying to make a living and put food on the table coexisted with another group: young people from more elite families who moved to Vermont and experimented with living in the country. Many were skiers.

I know Village Square Shopping Center didn’t exist. Neither did the shopping center across the street. Mehuron’s was still on Bridge Street where the Artisans’ Gallery is, and the Mehuron family lived upstairs.

In the book, “History of the Town of Waitsfield, Vermont” by Richard M Bisbee, he writes that in 1960, “. . . a sudden influx of people from other states swept into the valley and a new culture was born. New houses were built, old houses were completely changed, new roads were built -- the landscape literally changed . . . A perfect example should be given to denote fact. The Jasper Walton building (by the village bridge) was called the Tin Shop. It was a tin shop, hardware, plumbing store for years. It was the Griffith and Neil hardware store when the fire was on the side porch. It was Eaton General Store for years. Later it became Bisbee and Bisbee Hardware, Plumbing and Sheet Metal. Throughout the many proprietors, this building remained primarily in its original architectural structure and referred to as The Tin Shop. There were a few changes in the porch structure and the addition of the barn. In 1980s a new resident, through a grant, began to completely renovate some of these historical structures. This building was suddenly changed and called the Blue Building. The past was wiped away.”

In an article Amy Lilly wrote recently for Seven Days she writes, “In the 1960s, when Waitsfield was a haven for New York City transplants keen on fox hunts and polo matches, an architect and resident named Harlow Carpenter decided the area needed contemporary art. Armed with a master's in architecture from Harvard's Graduate School of Design and family money -- his mother was heir to the Bundy Time Recording Company fortune, a precursor to IBM -- Carpenter bought 80 hillside acres with a single, steep access road off Route 100. There he designed a gallery for the clearing at the top.

“When it was completed in 1962, the Bundy Center for the Arts, as Carpenter called it, was a rare example of high modernism in Vermont.”

While the more affluent were having a lark, many residents were struggling. Tony Italiano of Mad River Valley Television, filmed longtime locals Gordie Eurich and Paul Hartshorn talking about growing up in The Valley:

Paul: (When he was growing up in Warren) . . . we didn’t have any television. We didn’t have any electricity where I was . . . and we had outdoor plumbing. Most of your water ran into your house. It did at my place anyway. Spring fed to a barrel in the sink. And a lot of times it froze coming out of the faucet.

Paul: I packed trails. And on weekends I cooked at what they called the Starks Nest up on top of the mountain – coffee, hot dogs and hamburgers. And occasionally, I’d sneak a few cakes and pies from Tex (Thompson) and take them up there. I made more money than Tex did.

Tony: What year was this?

Gordie: Yeah, middle 50s. I started inside with Tex and stuff. And then they needed someone to load the Single Chair.

Tony: So, you guys weren’t around when Sugarbush opened?

Paul: I was farming.

Gordie: In 1958, I came back from California, and I went to work for Mad River . . . I worked on the Single when George Neil wasn’t there. I used to grease towers, whatever was needed . . . And Sugarbush wanted me to come over there -- that’s when Sugarbush was starting up. They offered me more money. So I went to Ken Quackenbush, at the time, and I said, “I got to have a raise, or else I’m going to go over to Sugarbush.” Well, they gave me a raise but everybody else that worked there too.

Paul: See, back at that time, there were a lot of mills. Early on -- mills and farms. The Valley was full of them. Then, all of the sudden, the farms went out; the mills went out. Especially after 1927. (There was a huge flood that year.)

And my dad used to be involved in town affairs in Warren. He said to me one time, “The town is going to die, The Valley is going to die if we don’t do something. I don’t want to see the ski area, but it’s the only thing that’s going to save this valley. And he had a vision of what was going to happen. And he was right. Because without the ski area, the farms, and mills . . . God I don’t know how many mills there was . . . I’m guessing 20, anyways.

Gordy: Oh yeah. Warren had a lot of mills. Irasville had several.

But the mills closed. Farms shut down too. Seventh generation Mad River Valley owner of his family’s Waitsfield farmhouse, Fred Messer, concurred in an interview on Mad River Television. He explained, “My father farmed this into the 60s when a lot of farms went out in Vermont. With the conversion from milk cans to bulk milk and having to have the cattle on cement rather than wood meant that the cows had to be moved from upstairs, downstairs. It was too much for a lot of farmers in Vermont. So, a lot of farms closed up. Sold out. In the mid 60s, early 70s. And my father sold the farm here.” (The good news is that Fred bought the farm and intends to leave it to his daughter as the eighth generation in that farmhouse.)

Another friend commented on Fred’s thoughts, “The main reason that small dairy farmers of that time were not able to make ends meet was the new regulations about milking methods and raw milk storage. We had made the transition from hand milking to the so-called milking machines that were run on a vacuum system and apparatus that was attached to the cows’ udders. That was expensive. Biggest expense though, was the new state-imposed and agriculture department-mandated bulk tank systems which stored the raw milk in a large stainless-steel tank which was internally refrigerated. This replaced the old-fashioned tall milk cans (I still have one from our farm) that we filled and stored in cold water until delivered to the collective dairies in Waterbury. This drove many small farms into debt.”

By 1963, mills and farms were failing. But the local economy was bolstered by three ski areas: Mad River Glen, Sugarbush and Glen Ellen. While the glitterati of New York society were partying up at the ski resorts, many farmers had traded one type of hard physical labor for another on the mountains. The wages at the ski areas were more reliable but they were also seasonal. While transplants were buying up farmhouses and land for what they considered peanuts, many farms and mills that had been in families for years were lost.

But there were also locals who capitalized on the influx of tourists and transplants too -- Brothers Building, Mehuron’s Market, Bisbee’s Hardware, Waitsfield Telecom, real estate companies. All grew with the population. It was a very mixed bag. (Part 2 next time.).