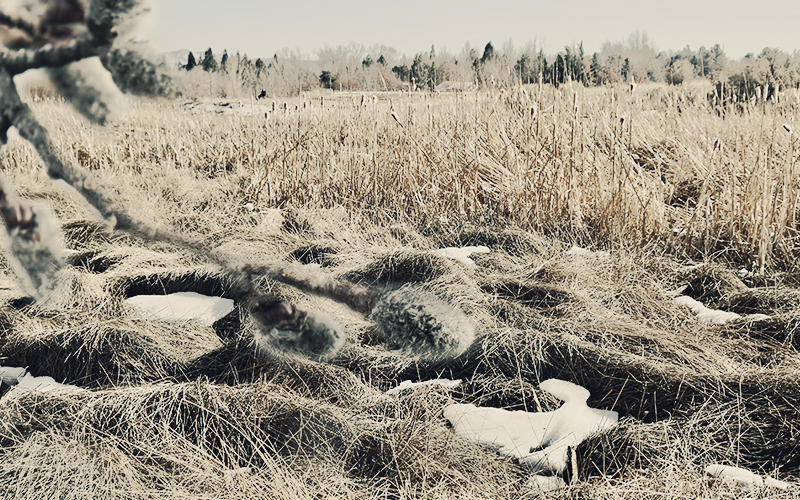 This is the season to think syrup (how many gallons?), crocuses, snowdrops, ordering lilies for Easter services and dreaming of the garden you hope to plant.

This up-and-down weather we have been having sure has the trees confused. Our soft maples are heavily budded. Hope they don’t get nipped too badly. Plus, we are having a very bad fifth season, aren’t we? Mud, mud, mud, deep mud. Have heart, it does get better at some point.

It’s also pussy willow gathering time. We always got mom some fresh pussy willows each year. Back before the town of Fayston widened and raised our road in North Fayston, there were practically no deep ditches and a lot of brush and bushes between the edges of the road and the stone walls that bordered the property lines (many walls served as fences) so, pussy willows were easy to get.

As far as I’ve been able to surmise there are two kinds – one a small bush type with the fuzzy little catkins staying not much bigger than the end of my little finger and the other grew much taller and had big fat catkins, more like your index finger. I may wrong since I’ve never looked it up. Up until a few years ago, I always had a vase full of pussy willows, but I can’t climb in and out of ditches or embankments like I used to.

Never put the pussy willows in water; leave them dry otherwise they will bloom and you’ll have to throw them away. They are for dry arrangements.

Next to bloom will be forsythia. Surprising that a zone 5 plant does so well in perennial zones 3 and 4. Just put them in a sheltered location and they will do OK. The southern dogwood does the same, but isn’t quite as hardy and needs more shelter.

Vermont has a wild dogwood called the red twig dogwood. This species likes wet areas. You see them everywhere along the back roads and in swampy pastures. Get a small clump and watch it spread. It doesn’t grow very fast but will get wilder. It is a good side bank or ground cover.

This time of year was sort of the doldrums for us kids. We were out of school for two to three weeks because of mud, sugaring and Easter vacation. So, our days were very tiring and we would be glad to get back to school. By then recess was a little more fun as the weather had gotten a lot warmer and drier. Usually no more scarves, mittens and runny noses, etc.

For my family, we kids always went home for lunch, as did Bobby Henry and I think Marie Nelson, except the year we had hot lunch. The mothers each took turns to cook a meal at home and deliver it to the school at noon. However, many lived too far without the means to deliver the main meal. Our mother carried her meal to the school by hand – no car or other transportation. It was the same for the Dunbars. Mrs. Dunbar had nearly a half mile on top of a mean hill. Dunbar Hill Road is a lot different now than it was back then. It used to be a lot steeper and only one-car wide with one bad ditch. The Griffins were almost a mile from the school so hot lunch lasted only one year. Everyone else brought lunch boxes.

One teacher didn’t like me. So, when I asked for another hot dog, she insisted I have another serving of boiled cabbage before I could have the hot dog. Halfway through the cabbage, I heaved all over the floor. Boy, she was mad, but she wouldn’t listen to me that I’d get sick with boiled cabbage. I had her for my first six years of school.

Mom often made a big pan of baking powder biscuits and we’d have them with butter broken upo in a bowl with maple syrup or a couple of slices of bread broken up in a bowl with blancmange. If we were lucky, maybe some sliced bananas too. Since we always had all the milk we could use, blancmange was on our menu a lot. She would also add cocoa.
Life was hard but simple too. The outside world was a long ways from our daily lives.

Until next time, peace to all.