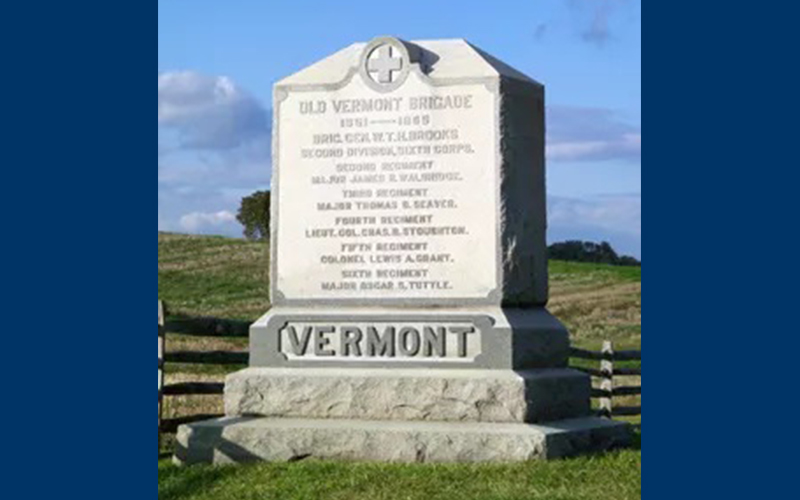 After visiting Cedar Creek (a Civil War battlefield described in the previous essay of this series), I traveled to two sites in Maryland -- Antietam and Monocacy. Because I’d toured both fields before, the summer 2021 visits focused on areas where certain units that included Waitsfield soldiers had been engaged.

A National Park Service brochure describes the context of the deadly September 17, 1862, battle this way: “Lee’s Maryland Campaign -- his first major foray onto Union soil -- was the most significant in a series of loosely coordinated Confederate incursions along a 1,000-mile front. Lee intended to keep moving north into Pennsylvania, but his line of supply and communication into Virginia was threatened by a garrison of 12,500 Union men at Harpers Ferry, VA, (now West Virginia).”

To counter the Union threat, Lee assigned these responsibilities to three top commanders: Take Harpers Ferry and hold the Crampton Gap of South Mountain (Jackson); secure Hagerstown, MD (Longstreet); take two other South Mountain gaps near Boonsboro, MD (D.H. Hill). Those goals were met in the first two weeks of September and on September 15, Lee ordered all his forces to concentrate at Sharpsburg, Maryland. Meanwhile, Union forces under George McClellan had left the D.C. area in pursuit of the Confederates. McClellan’s Army of the Potomac fought three battles on South Mountain before it crossed Antietam Creek and encountered Lee’s left wing on the evening of September 16. The battle the next day left over 3,500 dead and 17,000 wounded, making it the deadliest single day of conflict in the war.

I visited a memorial to the Second Regiment, U.S. Sharpshooters at the southwest corner of the deadly cornfield section of the Antietam battlefield. Following the battle, the only members of one Vermont company left fit for duty were its captain and four men. While no Waitsfield men were present in the Second Sharpshooters Regiment that day, two weeks later Waitsfield’s James A. Foster was mustered in as one of many Vermonters assigned to refill its depleted ranks.

I also walked the Bloody Lane where two Union divisions were slaughtered in an advance against Confederates. (One of those divisions included men who had enlisted just two weeks earlier.) Nearby stands a monument to the Old Vermont Brigade, serving under W. T. H. Brooks at the time.

Brooks’ men were held in reserve most of that day under constant artillery and sharpshooter fire. They continued to hold their position until September 19.

James Read, a sergeant in the 10th Vermont Infantry, is quoted on an NPS marker at Monocacy that commemorates fierce fighting along Araby Church Road: “The rebels attacked charging in several close lines on our single line. They were repulsed twice with very heavy loss . . . the road and yard were literally filled with them.” The same explanatory board states that Union troops held the Confederates at bay most of that day (July 9, 1864) until the Union front collapsed and fell back to the Georgetown Pike, where it made a final stand. The Union defense was weakest on its right flank and Confederates attacked it there. The battle was lost and the federal troops retreated.

Nonetheless, that Union force is credited with having stalled the Confederate approach to Washington, D.C., saving the capital from likely destruction. Major General Lew Wallace left behind some 1,300 casualties (dead, wounded, captured or missing), but was praised by Ulysses Grant as having contributed more “than often falls to the lot of a commander of equal force to render by means of a victory.”

Of five Waitsfield soldiers enrolled in the 10th Vermont, only two were present at Monocacy: Chester Dana and Daniel Foster. Foster was wounded a few months later in the Shenandoah Valley but both men survived the war.

Hiram Luce had been the first casualty of that Waitsfield group, dying of disease in April 1863. In November of that year, Willard Thayer was mortally wounded during an engagement at Locust Grove, Virginia. Edwin Harvey Dana, who suffered a gunshot wound at Cold Harbor, still was hospitalized in Sloan General Army Hospital at Montpelier during the Monocacy engagement.

Text on Monument in photo

north of Bloody Lane at the Antietam National Battlefield, Maryland