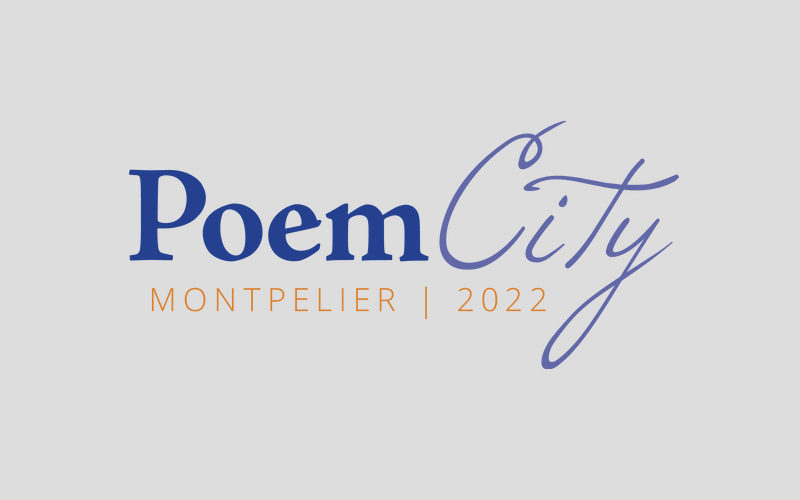 April is National Poetry Month and that means poems by Vermont poets of all ages are displayed in business windows throughout the city of Montpelier. PoemCity was founded by Montpelier’s Kellogg-Hubbard Library in 2009 and has spread to other communities, such as Randolph, Brattleboro and St. Johnsbury. The monthlong celebration of poetry also includes events such as a poetry slam at the Lost Nation Theater on April 22, ‘Poetry in the Park’ at Hubbard Park on April 24, and a Zoom reading of LGBTQ+ poets on April 25. See www.kellogghubbard.org/poemcity for more details.

Valley poets Erika Nichols-Frazer, Waitsfield (staff writer for The Valley Reporter), and Susan Bauchner, Waitsfield, both have poems posted in Montpelier for the month of April as part of PoemCity. Bauchner recently conducted a poetry workshop alongside Sally Reisner at the Warren Public Library. Nichols-Frazer’s first book of essays comes out in September and her poetry collection, which includes the following poem, will be published by Main Street Rag in 2023.

You can find Nichols-Frazer’s poem, “Clyde’s Ashes,” at the Capitol Stationers on Main Street in Montpelier and Bauchner’s poem, “Turnover Week,” at the Walgreen’s, also on Main Street. Poems by Vermonters of all ages and writing experience levels can be found throughout the city.

His eyes never saw the whale or the arc

of mountain range or glare of icecaps,

along for the ride in a small metal urn.

His body never went to space when it was whole

(blood and bone, muscle and sinew)

but he believed in extra-terrestrials and unidentified flying objects.

He believed in God.

On his family’s farm in Streator, Illinois, Clyde built telescopes in a pit he dug,

squinted at stars and sketched planets, even discovered one in 1930,

His body returns, not to Earth, but to the land he saw in the sky,

which shares a name with the Roman God of the underworld.

At the end of the line, he is given back to Hades.

at the helm of an expedition he charted only in dreams,

on Valentine’s Day, or an open palm outreached,

which someone else names Tombaugh Regio,

the Heart of Pluto.

Nichols-Frazer said this poem was inspired by the 2015 photographs of Pluto taken by the New Horizons spacecraft. She read that the ashes of the man who had discovered Pluto were on the spacecraft, which struck her as both odd and fascinating, that the remains of someone who was a proponent of early space exploration, who never got to go to space in his life, would, in a way, pilot the ship that took the first detailed images of the dwarf planet. He also founded a church in New Mexico that features elaborate stained-glass windows of the cosmos. This poem is her tribute to him.

While sorting through this week’s
recycle bin, I made a discovery.

It’s “turnover week,”
the time when I give in to the fact
that there’s not another drop to be had.

Emptied down to the bottom, as much as possible,
is Lubriderm Unscented Body Lotion.
It lies next to Hellman’s Light Mayonnaise.

Bauchner said at the recent poetry workshop at Warren Library that this poem was inspired by the contents of her recycling bin. Her poems tend to be observational about everyday life.

Both poets had work published in the Mad River Libraries’ pandemic anthology, “A Year of Its Own.”