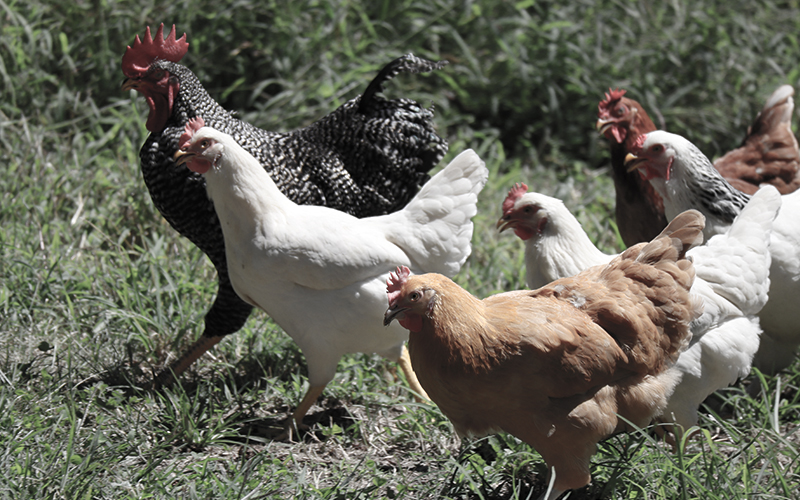 Claire Ewald, Waitsfield, has been raising meat birds for 35 years. She currently has a flock of 27 chickens and five ducks. The chickens are mixed breeds, including Barred Rocks, Rhode Island Reds, Wyandottes and Barnvelders. There’s one male duck and only one of the four other ducks is of laying age; the rest are “pensioners,” Ewald joked. She doesn’t currently have any roosters, though previously had one who “attacked everybody” and had to find a new home for him.

The birds live in a stall in Ewald’s barn. They used to free range, but Ewald has noticed hawks flying low over the property, so now they “don’t get as much freedom.” She’s had other predators attack the birds in the past, including minks, weasels, and foxes. “We’re pretty careful about [the chickens and ducks] going out.”

Lately, the birds have been facing another threat. Ewald got a flock of chicks in late April and so far, she’s lost eight of them to mysterious causes. The chicks have been dying with no obvious signs of sickness or injury. She’s sending the bodies out for autopsies to figure out what’s happening. So far, she’s talked to vets and the supplier at the feed store where she got them and is as of yet unsure of the cause of death. “We’re pretty sure it’s not avian flu,” she said. Typically, the meat birds would be in the freezer after 10 weeks, but she’s not yet sure if this new flock is safe to eat.

Ewald sells the chicken and duck eggs, in addition to using them at home.