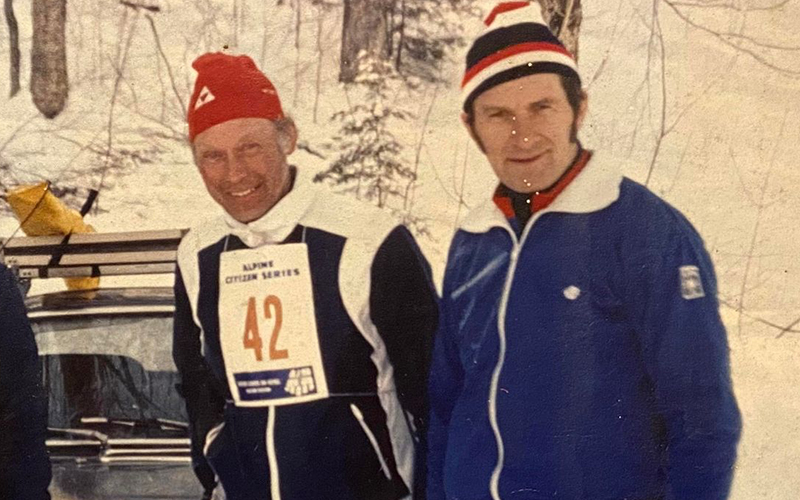 The air was still and frigid. I had to move my arms rapidly in a circle to keep my fingertips from getting numb. The term bone-chilling was a reality on this cold January night at the Blueberry Lake Cross Country Center.

I could have been warm and toasty at home sipping mulled cider and correcting papers in front of a crackling fire. It was a school night. An hour earlier I had to make a decision. Do I use my few hours of free time to prepare tomorrow’s lessons, or do I participate in the Wednesday Nordic race series at Leonard’s?

His vision was to create a recreational opportunity for his neighbors living in Warren and the Mad River Valley. However, he eventually lost the rights to his own land and all of his efforts in the construction of the lake appeared to be wasted. Lenord had a warm heart and a solid handshake. Evidently even his firm and honest handshake was not good enough and he lost the rights to the lake to a business partner.

Lenord may have lost the lake (It was preserved as part of the Green Mountain National Forest in 2000) but he still owned much of the surrounding land.

He built miles of XC ski trails on this land. One New Year’s Eve, I helped Lenord and his son, George, string hundreds of sparkling Christmas tree lights along trail No. 1. Trail one was a 1-mile rolling loop that went through boreal forest that contained many firs and balsams. This was the trail used for the race series. The snow held up by the bending boughs of the fresh scented balsams and accented by the white miniature lights created a warm and inviting atmosphere.

Every winter on Friday, the students at Warren Elementary School would arrive at the Blueberry Lake Cross Country Center for an afternoon of skiing. They would borrow equipment and receive lessons from Lenord. He would be right there with all of the kids, sweating on the uphills and laughing with them as they slid off-trail on the curvy tree-lined downhills. Lenord’s own granddaughter, Jenny, was part of this group. Jenny went on to become one of the top skiers in the country winning many biathlons.

Many of the skiers on my Nordic team whom I coached at Harwood Union High School had their first ski experience at Blueberry Lake. With Lenord’s help Harwood developed a strong Nordic program that was one of the most competitive high school programs in the state. It was his affection for the sport and love for the kids of The Valley that got me off the couch and over to Blueberry Lake on this frigid January evening.

When I arrived at the race venue, I was expecting to see dozens of other skiers prepping for the 5k races. The temperature on the Swix thermometer outside the warming hut registered at -10 degrees Fahrenheit. As a ski coach, I was aware of the fact that -4 is the cut off for high school races. This was not a high school race, so we did not have to abide by FIS or VPA rules. However, the cold temps kept almost everyone away. Everyone except Ole Mosesen and myself.

Ole had a stocky muscular build with high cheekbones and piercing blue eyes. He had a dark-skinned hardened weathered face and a raspy voice that matched his thick Norwegian accent. Ole is credited with introducing Nordic skiing to the Mad River Valley.

During the winter he ran Ole’s Nordic Center in East Warren. Ole’s was much different than Lenord’s center.  Blueberry Lake was situated in forested woodland. Ole’s was located on a high plateau, which included the runways at the Warren-Sugarbush Airport. The views were incredible. One could see the entire front range of the northern Green Mountains from Mt. Abraham and Camel’s Hump to Mt. Mansfield. One could ski over gently rolling terrain that included gladed and open pastures. Ole said it resembled his home in northern Norway. However, it was quintessential Vermont.

In the summer Ole would go to Norway where he lived in a cabin hundreds of miles above the Arctic Circle. When he returned to Vermont in late fall, he would provide smoked salmon to his friend Henri Borel owner of Chez Henri restaurant located on the slopes of the Sugarbush ski area.

Ole’s background as a Nordic skier was legendary. He challenged many younger skiers at local Nordic races. He often would surpass their efforts with his own display of finesse and grit. Although now way past his prime, he maintained his youthful fitness and strength. He also had beautiful classic technique. I would point him out to my skiers and encourage them to ski behind him and model his form. Even my best high school skiers could barely keep up with the much older man.

Ole and I shuffled over to the starting line. Lenord was holding the stopwatch. “I guess it’s just you two,” said Lenord. Ole gave me an intimidating look; kind of like the Norwegian way of saying I am going to kick your ass. I looked back with distress. I was more than a little worried about racing head-to-head against The Valley’s Nordic legend.

If you have a story idea, please write to This email address is being protected from spambots. You need JavaScript enabled to view it.. And please consider donating to and volunteering for The Historical Societies of Fayston, Moretown, Waitsfield and Warren.