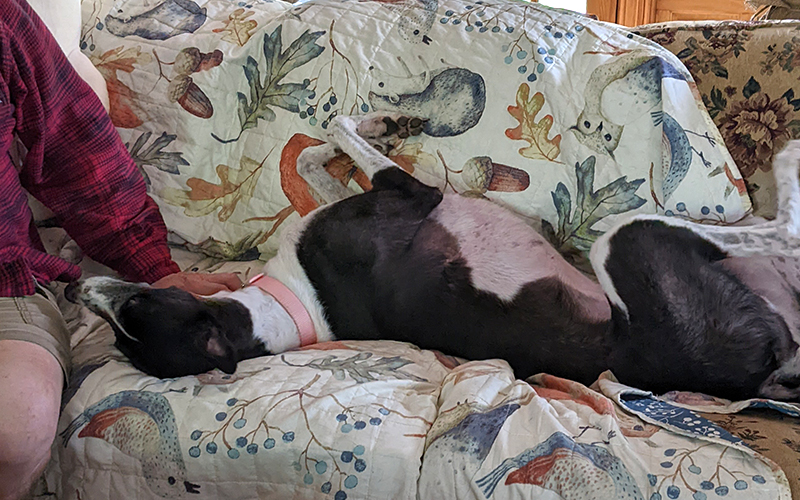 Sydney, a nearly four-year-old greyhound recently adopted by Sal and Debi Spinosa of Waitsfield, has found her home. She loves squeaky toys, belly rubs and car rides. Sydney came from a racing track in Ireland via Fast Friends Greyhound Adoption in Swanzey, New Hampshire. She is the sixth greyhound the Spinosas have adopted over the last 20 years.

Their first experience with Fast Friends was when they heard about a dog in New Hampshire with a broken leg who was going to be euthanized. Apparently, the dog -- a champion racer -- was being used to blood dope other dogs. When the Spinosas heard of this, they knew they had to help. “It’s a mission for us,” Sal said. Debi Spinosa said she and her husband have always been attracted to injured dogs. Sydney has a ligament injury on her front paw. “They are saving dogs’ lives,” Debi said of the shelter, which has been finding homes for greyhounds and sight dogs since 1992.

“They are an incredible breed,” Debi said, noting their adaptability to homes and calling them “very loving … very large personalities.”

“There’s something in their eyes and face and demeanor,” Sal added. “They seem very thoughtful.” He said they can also be “goofy.”

There are around five greyhound tracks still in operation in the U.S., mostly in the south. Dog racing has been prohibited in Vermont since 1995. There was previously a greyhound rescue in Vermont, though it has since closed. Dog racing remains prevalent in Ireland and, with most U.S. tracks closed, shelters like Fast Friends are working to find homes for greyhounds coming from abroad. “It’s a pretty brutal existence they have,” Sal said.

Greyhounds are the world’s oldest purebred dogs, dating back to 8,000 years ago in Egypt, where they were exclusively owned by royalty.

For people who may be considering adopting a greyhound, the Spinosas recommend getting in touch with Fast Friends. They also said they would be happy to answer any questions about their experiences with the breed. When adopting from Fast Friends, there is an initial assessment to determine the best fit for the humans and dogs. Adopters visit the shelter in Swanzey and meet several dogs who have been pre-selected based on their needs. The adopter(s) can meet each dog and ask questions. Fast Friends then delivers the selected dog to the adoptive family’s home some five or so days later. The group spends time in the family’s home to ensure it is suited to the dog’s needs. Debi said, if it doesn’t work out, Fast Friends will take the dog back, though she said that was rare. More information can be found at www.helpinggreyhounds.org.

The Spinosas have taken Sydney to visit Debi’s mother, who lives in a nursing home. [Sydney] “brings them so much pleasure,” Debi said of the residents. “They all come by, want to say hi, pet her.”

According to the Spinosas, greyhounds love to run and chase small animals. Sydney recently caught her first mole. “There’s a bit of a myth that because they’re so fast and athletic they must be hyper and hard to maintain,” Sal said. He said, in reality, greyhounds tend to be very calm, and that Sydney is content on the couch 22 hours of the day.

“I think a greyhound would be a fantastic addition to anybody’s family,” Debi said.