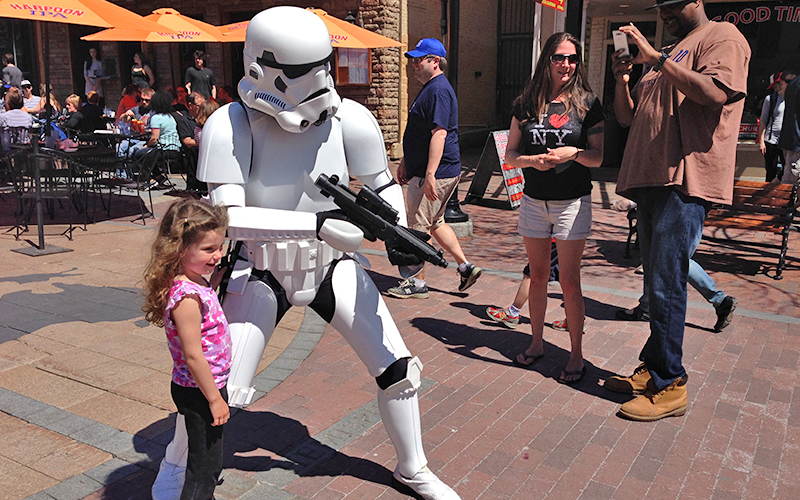 Harwood alum Andrew Liptak, who grew up in Moretown and now lives in Barre with his family, has written a new book on costume play, or “cosplay,” and its origins. Cosplay is defined as the act of dressing up as a character from a work of fiction and is often associated with popular conventions. “Cosplay: A History” will be published by Saga Books, an imprint of Simon and Schuster, at the end of June.

Liptak opens the book in the following way: “Think back to the film that you love most. Or that television show you binged in its entirety over a weekend, the book you stayed up all night reading, or the video game you spent countless hours trying to beat. Remember the feeling you had where you could be part of that story, living in that world, if you only closed your eyes? That’s the feeling that comes to life around the world as thousands of fans descend into their workshops, make their way to convention floors, scenic landscapes, or out on the street . . .l That feeling of love for a story is what motivates people to dress up as their favorite characters.”

By day, Liptak is the public relations and guest services coordinator for the Vermont Historical Society, but in his free time, he dons stormtrooper regalia as a member of the international 501st Legion group dedicated to Star Wars cosplay. Liptak traces his own cosplay journey back to his Harwood days, when he, as a young jazz musician with a Star Wars obsession, convinced band director Chris Rivers to dedicate a concert to music from the Star Wars movie franchise and he invited a member of the New England chapter of the 501st Legion to portray a stormtrooper at the concert. It was a huge hit. That stormtrooper sent Liptak his own stormtrooper armor and he was hooked. Liptak has donned his stormtrooper gear (and other Star Wars-themed costumes) in Times Square, in appearances with Weird Al Yankovic and to fulfil Make-A-Wish recipients’ wishes.

Liptak calls cosplay “the intersection of art, culture, and technology.” Cosplay, he writes, isn’t just about putting on a character’s clothes for a while; it’s a community. It can also be quite involved and meticulous, requiring both theatrical and mechanical skills. It requires attention to detail and a great deal of creativity.

As the book’s title suggests, Liptak takes his readers through a historical tour of the history of cosplay. Though he says the modern cosplay movement began in the 1930s and has erupted in recent years, Liptak writes that costume parties and dressing up as beloved characters dates back centuries. Jules Verne threw elaborate costume parties featuring characters from his books in the 19th century, around which time the first science fiction convention was founded in London, Liptak recounts.

TV shows like “Star Trek” in the 1960s have had a profound impact on the cosplay movement and inspired more female cosplayers to get involved in sci-fi conventions. “What “Star Trek” did was change the nature of fandom,” Liptak writes. “For decades, it had been a community dedicated to the written word of science fiction. With ‘Star Trek,’ an entirely new generation of fans met science fiction for the first time, unencumbered by the traditional gatekeepers that reinforced the notion of what it was to be a science fiction fan. The result was more women and fans of color picking up the mantle.”

In the 1970s, the “Star Wars” movies came on the scene and introduced a wider fandom dressing up as their favorite characters. It remains one of the more popular franchises in terms of costumes found at conventions. Liptak was even invited to attend “The Rise of Skywalker” film premiere in 2019 as a stormtrooper with the 501st Legion.

The book reads like an encyclopedia of all-things cosplay, dating back to the early sci-fi conventions of the 19th and 20th centuries. In addition to a historical telling of the trend, it also paints a vibrant picture of the present-day cosplay community, active at events and conventions nearly every weekend of the year. It further provides details on the making of costumes such as stormtrooper armor, emphasizing the incredible ingenuity and creativity of costume makers.

“Cosplay: A History” tells the story of a burgeoning industry and movement of fans of all things fantasy and sci-fi and how millions can bond over a shared love of a piece of fiction. Whether you’re a costume-wearing fan yourself or simply curious about the popular trend, Andrew Liptak’s new book will open your eyes to the diverse and eclectic world of cosplay.

Liptak will give a talk at the Rail City Fan Expo in St. Albans on June 25 and 26. The book launches at Phoenix Books in Burlington on June 28. Liptak will also be at the Granite City Comic Con in New Hampshire and Ticonderoga in New York state this summer.