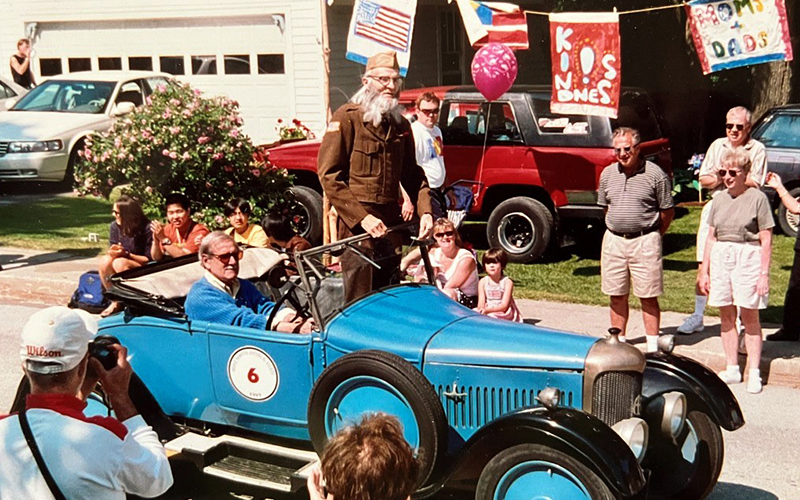 We celebrated the 73rd Warren Fourth of July parade last month and it made me curious about the history of the event.

“Back when 1776 was a living memory, just a generation or two past, the typical July 4 event was filled with lengthy orations and florid odes and classical music, sort of like a prolonged church service. Then, sometime after the Civil War, Vermont found its sense of humor and zaniness took over -- except in places like staid-old Burlington, which kept a lid on the craziness.” (Tim Johnson, Free Press Staff Writer.)

A “living memory” is a situation or person that can be remembered by someone who is still alive. A good example is Charlie Brown of Warren. Not only has he been at the parades since he arrived in The Valley in 1965 but he made a film about it. His memory of the Mad River Valley includes a firecracker of a woman named Emma Ford, who was Warren’s town clerk for 49 nine years.

Local Pam Lerner also knew her: “I remember Emma Ford as a feisty person with curly gray hair who ran the city from her home on Route 100, across from the north entrance to Warren Village. Long before computers, you seemed to have everything you needed right there. She wrote the city records by hand, in beautiful, clear, copperplate handwriting.”

Emma also loved the Fourth of July and organized good old-fashioned parades. She gathered horse-drawn carriages, musicians and veterans to be part of it. She also hosted a horse show before the parade. It was reported that she may have had as many as 50 animals in any given show.

Another institution of the parade was a fellow named Addy Munroe. The film that was made by Charlie Brown was to celebrate the 45th anniversary of the parade in 1993 and it includes an interview clip of Munroe.

He said, “I’ve been master of ceremonies for the Fourth for about 30 years. The main function is to keep things moving and to be as informative as I can be about the floats and the history behind some of them, and their relevance to The Valley. “And to try to keep the judges organized and doing their job. . . which is not an easy job at all.

I’ve got one shirt, this one, that I wear for the Fourth and my old fireman’s summer parade hat. That’s part of the costume.”

There is a quick cut away in the film where Munroe is announcing on the bandstand, “Here we have Henry Perkins, part of the Tenth Mountain Division, The Valley’s own.”

Back to Munroe’s interview, “Of course the highlight of all the parades in the old days was Hap. That was it. It wouldn’t be the same and it hasn’t been the same without him. His memory is marching right along with all the people in the parade.”

You may need a little information about Hap Gaylord, especially if you are young or new to town. I’m sharing some facts I found in his June 24, 2005, Times-Argus obituary and comments from his daughter Pearl Vargas.

Hadley M. "Hap" Gaylord Sr. was a lifelong Waitsfield resident, raconteur, and noted political spokesman. Born in Waitsfield on October 3, 1924, he died at age 80. He was the son of the late Walter M. and Gladys (Palmer) Gaylord. On October 24, 1948, he married the former Eloise G. Heath in Waterbury. Mrs. Gaylord died five years before he did.

Hap was a graduate of Waitsfield High School when it was in the historic section of town. He continued his education at the University of Vermont, graduating from the former Burlington Business College and later graduating from the Vermont Agricultural School in Randolph.

Vargas wrote, “Hap never made it to serve in the military overseas or stateside during WWII due to an illness while in boot camp. He returned to Vermont just after the two-month illness and decided he would work diligently supporting all service men that had returned from any war. He drove them to the VA hospital for medical appointments, marched at military rallies, spoke out at the American Legion or VA to get better benefits for them and, in this manner, his service to his country continued.

With the help of his wife Eloise, he bought the family's farm and ran it for 11 years. He worked for the Mad River Glen ski area too. Then he founded Hap's Service Station and managed it until his retirement in 1986. He remained an institution at the garage as his sons carried the family business forward.

Hap was nationally known as the Grand Marshal for the annual Fourth of July parade in Warren for many years.

In Charlie Brown’s film about the parade, this is what Hap’s son Allen had to say about his father:

“He never had a costume made, never knew what he was going to be. He’d say to my mother, ‘Eloise, I’ve got to have a costume.’

“She’d say, ‘You picked a fine time to start looking for one.’ And that was probably 35, 40 minutes before he was going to be picked up by someone on their way up through to the parade. She was pretty much what held him together on the Fourth of July. Put him in motion and got him in his suits and his [costumes] . . . the way he was . . . the whole nine yards. He was the Statue of Liberty one time, he was kind of a hobo sailor one time with one tooth knocked out, Abe Lincoln one time, George Washington. He even dressed up as the Shaw of Iran one year. I remember that.

“Superman. That was one of the most interesting floats there was. My father had a hell of a lot of charisma. He was a very unique man when it came to the Fourth of July parade. He absolutely loved the theatrics of it. Enjoyed all the people who came.”

Vargas added an interesting anecdote, “I can relay one story that happened when I was around 10 years old. It's not associated with the July 4 parade, but I will pass it along anyway. One morning, my father, my brother Hadley Jr. and myself went fishing on Deer Brook in Fayston. As we fished and traveled up the brook, my father suddenly stopped us and said, "Don't move." My brother and I looked up and there was a bear coming down the hill towards us. He was probably coming for a drink at the brook, but my father took no chances. He did have a shotgun with him in case he saw a partridge to shoot. My father came up behind me, placed the shotgun on my right shoulder to keep the gun steady, and when the bear got close enough, he let go a shot at him. The bear went running up the mountainside and we went in pursuit of him. We knew he was hit as we were following the blood trail. We climbed the mountain mind you, with our fishing poles and bait in hand. At the top of the mountain, we still had not found the bear and we did finally have to stop the search. My right ear was ringing so badly, and I could not hear out of that ear for days. The blast and reverberation that occurred right next to my ear from the shotgun was so extensive it caused my temporary deafness. Needless to say, I did not enjoy hunting with my dad thereafter.”