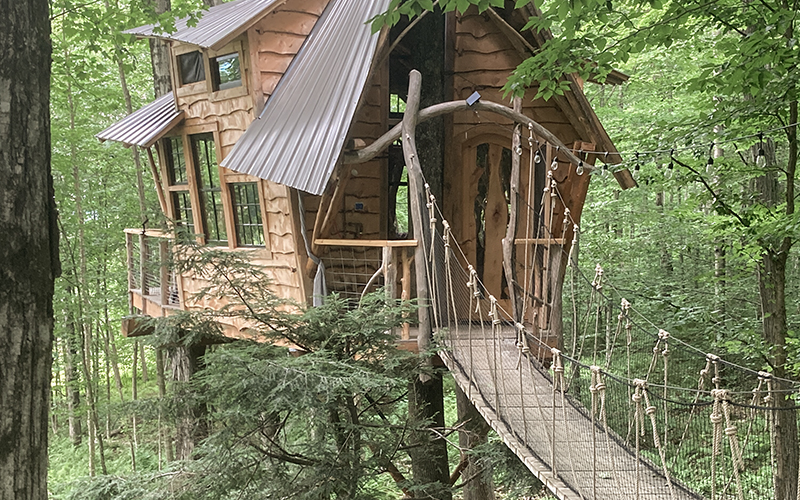 B’fer (the moniker that stuck when his father called him James B-for-Burton Roth, and he thought his father said “B’fer”) Roth lopes into the Madsonian Museum of Industrial Design in Waitsfield holding the hand of his 4-year-old grandson, Julien, while reaching out to embrace the friends who have shown up to see his slide-show of treehouses he has designed and built over the past decade. The September 9 opening also attracted unfamiliar faces, too — people who read about the presentation and were curious to meet the man who has acquired fame designing and building treehouses. (His popular show, “The Tree House Guys” ran on the DIY television network in 2015.)

Roth attended Michigan State for two years, then left and hitchhiked around the country for two years, ending up in Warren, Vermont, getting a Bachelor of Fine Arts degree from Johnson State. He built his first treehouse off Plunkton Road in Warren, and during that time met and married photographer and book designer Dana Jinkins. They have two daughters, and four grandchildren.

Over the past few decades, he worked as a house builder, then began a small business building stick furniture. From there he joined Forever Young Treehouses, eventually partnering with Chris “Ka’V Haake to create Treehouse Guys LLC.

The more intimate story is that Roth, to his family and friends, has always been associated with trees. He makes gifts for friends, creating round blocks and covering them with his poetry. He roamed the forest for years, picking up fallen limbs and making them into art. When asked about his relationship to trees, he said, “Some people go to church for a sense of connection. I go for a walk in the woods.”

He is himself an inspiration to all, especially to kids. The treehouse that he designed on a farm in Moretown represents all aspects of Roth, with the interior reflecting the design instincts of his wife, Jinkins. He built it with his son-in-law, Dan von Trapp, for his grandchildren, and it is a favorite hangout for family and friends.

Another favorite place for Roth is Camp Zeno, in Lincoln, Vermont. Roth built the treehouses that enable children and adults with various challenging conditions to immerse themselves in a creative environment where they make films and create theater. When asked if his sense of playfulness translated into the treehouses he designs, he said, “Absolutely! There is no better place to daydream or just be a kid than in a treehouse.”

At the Madsonian Museum a week ago for the opening of the treehouse exhibit, Roth said that when he gives a presentation, what he most wants to get across is “the joy and peacefulness that you feel when being in a treehouse that really sets you apart from your everyday busy world. There’s nothing wrong with a little escapism now and then.”

The treehouse exhibit at the Madsonian Museum of Industrial Design in Waitsfield will be up for the next two weeks.