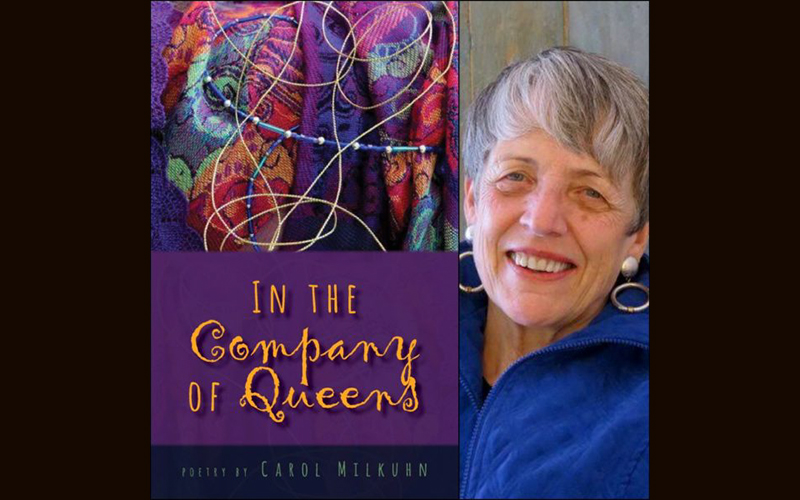 Orchard Street Press recently published Carol Milkuhn’s latest collection of poems, “Modern Tapestries, Medieval Looms.” Milkuhn lived in Waitsfield for 18 years and now lives in Saratoga Springs, NY, though she returns to Vermont every year. “I miss Vermont and am always very glad to get back to it,” she said.

A former English teacher, Milkuhn discovered her love of writing poetry when she retired. Not long after she moved to Waitsfield in 1997, she was in Joslin Memorial Library and came upon a group called the Mad River Poets. She joined the group and soon after joined the Poetry Society of Vermont, too. “It changed my life,” she said. She began writing and publishing poetry in literary magazines such as The Mountain Troubadour, Bloodroot Literary Magazine and Vermont Literary Review. She wrote a novel, “The Tapestry of Queens,” published by Bagwyn Books in 2014. Her first poetry chapbook, “In the Company of Queens,” was published by Finishing Line Press in 2016.

Milkhun lived in Scotland for a year and is very interested in Scottish history and the Tudor period in England. “I think it’s because Henry VIII’s wives made a difference,” she said. “They did change the world. I’m very fascinated by them. I’m interested in the past but wondered about the connections between past and present.”

The wives of Henry VIII inspire Milkuhn’s latest collection, which includes poems such as “Reflections of Catherine of Aragon’s Sister” and “Anne Boleyn’s Dressmaker.” The book combines past and present and reflects on the roles women have played in history, from Mary, Queen of Scots, to Jane Austen. Milkuhn said the poems in this book are also heavily influenced by her time in Vermont. “A Walk with My Dog” takes place in Waitsfield in mud season, “Twenty One Speed Heaven” chronicles a bike ride through Vermont complete with a creemee. “In Gratitude for a Vermont Lake” is a love letter written to Echo Lake in Charleston, VT. “Awakening” takes place in a yoga studio in Waitsfield and “The Zen of Berry Eating” tells of missing the joys of picking fresh berries in The Valley.

“Writing has brought purpose and excitement and a lot of fun” to Milkhun’s life, she said. “It opened doors for me.” She also noted that she has met many people through writing whom she may not have otherwise met.

Like many groups, Milkuhn’s Vermont-based writing group turned to Zoom during the pandemic, which allowed her to participate from New York and allowed the group to add other writers from all over Vermont. “Zoom did change my writing,” Milkhun said. It allowed her to continue to receive trusted feedback on her work from afar.

Milkhun’s work is influenced by writers such as Ted Kooser and Wallace Stegner. She also loves to read mystery novels by authors such as Agatha Christie, Ellis Peters and Dorothy Sayers. When not reading or writing she enjoys knitting and walking her dog.

When asked what she loves about writing poetry, Milkuhn said, “Poetry forces you to find the exact word. You learn to express yourself more accurately. It deepens your understanding of language.” She said once she gets an idea for a poem it stays with her. Sometimes, she wakes up at 3 a.m. with an idea for another line.

She added that she thinks everyone should try their hand at writing poetry.

Copies of “Modern Tapestries, Medieval Looms” are available at the Tempest Book Shop in Waitsfield.

Mad River Glen and the natives