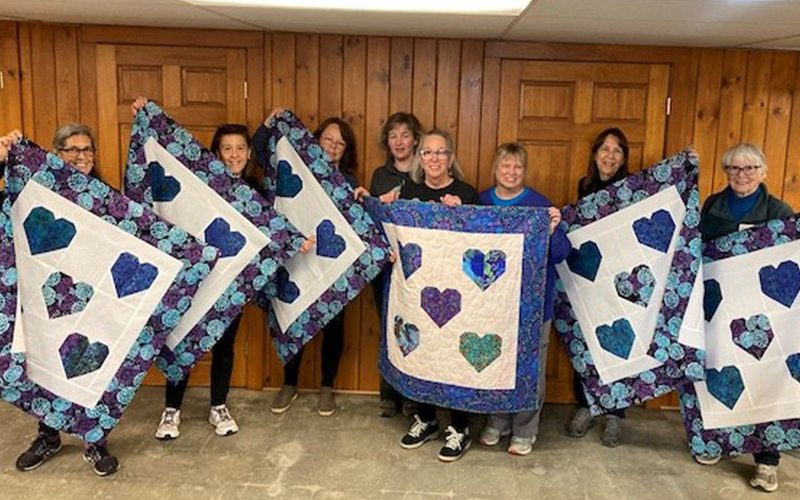 Bouchard and Rennau are longtime quilting friends and when Rennau read about a national effort (https://www.welcomeblanket.org/) to create welcome blankets for refugees, they decided it would be a great thing to do locally and they engaged members of the local IndivisibleMRV group to participate.

“We had some 20 people signed up and some had no quilting experience. I’ve worked in a lot of sewing factories. I made government gas masks in North Adams, Massachusetts, and worked for Merry Maids in Randolph. When working in textiles I learned how to do piece work and how to have people take on parts of the assembly process, working at stations. So, last weekend we had people who didn’t know how to quilt do things like mark the fabric for cutting and iron the fabric at stations,” she explained.

They worked in the basement of the Moretown Town Hall in two-hour shifts. They had help from retired Harwood Union math teacher Lisa Therrien in determining how much fabric and other supplies they’d need. Those who were quilters among the volunteers brought their sewing machines to stitch the quilt tops together. Bouchard, Rennau and Therrien worked as floor managers, roaming through the work stations, making sure work flow was steady and that pieces/tasks weren’t piling up anywhere.

They had organized the volunteers in three two-hour shifts based on which skills people had and found that a very efficient way to work. The quilt tops they were making had five blue hearts on them and getting those hearts marked, cut, ironed and sewn was their first priority.

“People were catching on really quickly. It was super fun and it was for a cause we all believe in. Our IndivisibleMRV is one of 5,000 Indivisible groups nationally and Indivisible paid for everything -- materials, food and snacks,” Bouchard said.

They purchased their fabric from a Quilter’s Garden in Montpelier where the owner gave them a 10% discount and gathered their quilts to take to Winooski where the Mill Museum is collecting blankets to be distributed to refugees in Vermont. In addition to the five quilt tops they created, they received one from a young woman whose mother made a quilt and had it sent to them to go with their quilts. That quilt was made in Massachusetts and featured the colors of the Ukrainian flag.

Because their process was so efficient, they found themselves with time to write Get Out The Vote postcards to 60 people in their Indivisible sister-state of North Carolina as well!

“One great part about Saturday was many of our people had never quilted before and they learned fast. Many hands working like a well-oiled machine pumped out five quilt tops for a great cause,” Bouchard added.