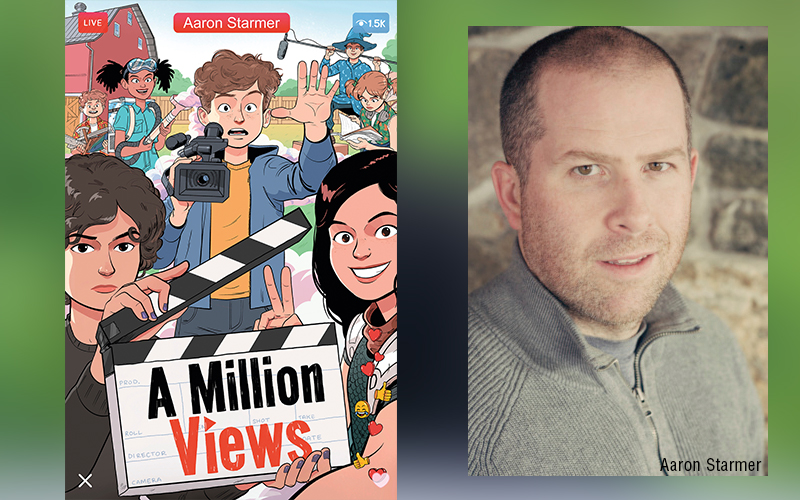 A new middle grade novel by Aaron Starmer, Waterbury Center, tells a heart-warming story of friendship and the pitfalls of navigating sixth grade. In “A Million Views,” 12-year-old Brewster Gaines prefers making videos for his YouTube channel to hanging out with other kids his age, none of whom seem to really get him. He feels lonely in his family, too, which always seems too busy for him. While other kids have family dinners every night, he’s used to eating Subway sandwiches alone in his room while working on his latest video.

But when Brewster sets a goal of filming a viral video that reaches a million views, he realizes he can’t do it alone. What begins as a 10-second clip featuring new girl Carly Lee quickly turns into an elaborate movie production with a crew of seven outsiders coming together over a common goal.

Skateboarding new girl and sudden ‘diva’ Carly, along with bossy producer Rosa, who’s funding the project, cosplayer Godfrey and his sister Izzy, special effects/animation whiz Harriet, hanger-on and ‘grunt’ Liam and the creative genius behind it all, Brewster, learn just as much about teamwork as they do about making movies. Brewster learns how to let go of some of his control and how to be a leader.

“Find a way” quickly becomes the crew’s mantra as they realize just how complicated making an epic fantasy movie trailer can be. With exploding aliens and battles between good and evil, the project becomes more about having fun with their new friends than going viral. The friends face obstacles along the way, including a strict teacher catching them in the act of filming in class, a dwindling budget, and, for Brewster, trouble at home. While the future of his family feels uncertain, he learns friendship can help him get through anything.

Set in an unnamed Vermont town, the novel references familiar Vermont locations and features Vermonters will recognize, including Higher Ground, Bread and Puppet Theater, creemees, witch windows and the reservoir. It also shows how hard it can be to be a new kid in a small town.

Starmer has written a dozen middle grade and young adult novels, including “Spontaneous,” which was recently made into a feature film. His latest middle grade novel, “A Million Views,” is available now from Penguin Workshop, an imprint of Penguin Random House. It’s a fun read for middle grade readers (elementary/middle school) and teaches how to be true to yourself, as well as the importance of friendship.