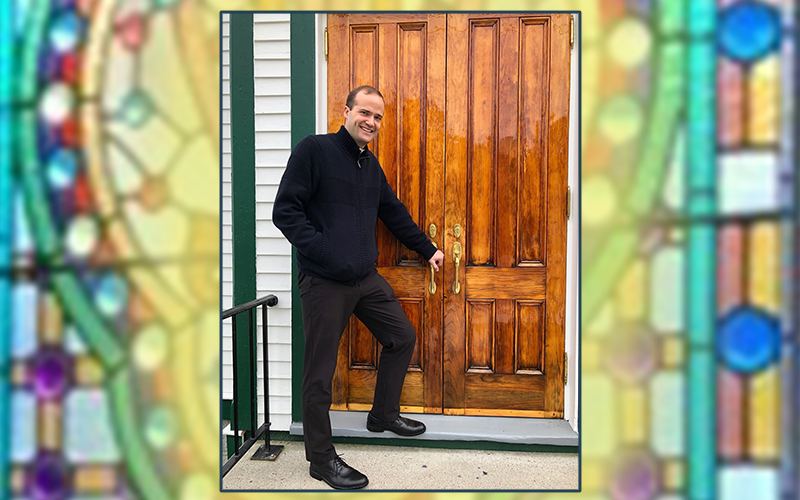 I was standing with Father Matthew Rensch in front of the newly-renovated and historically important St. Patrick Church in Moretown. The day was fall-foliage at its peak, complete with golden sunshine and a little nip in the air. Father Rensch had come to take me on a tour. We hadn’t seen each other since the whole pandemic lock down and we hugged hello. I, for one, was grateful that vaccinations enabled me to be comfortable with social closeness as opposed to the social distance we endured for so long.

Father said, “The exterior painting was done by Aron Kielich of Village Restoration. But the doors were refinished by one of our parishioners, Bob Mays. They were in terrible shape. There was no shine left on them at all. They looked as dull and beat up as a telephone pole.”

I like to tease Father Matthew about him being my son’s age, but as young as he is, it’s obvious he does know what he is doing. He’s prompted many changes since becoming the pastor at St. Andrew in Waterbury, St. Patrick in Moretown and Our Lady of the Snows in Waitsfield.

Jim Tabor recounted the process of St. Patrick’s renovation in a document that became the annual report, “The venerable church had not been painted in 22 years. Aron Kielich started in July, pressure washing and scraping. Gib Geiger worked ahead, repairing rotted trim, and replacing clapboards. The church then received a special primer and three coats of latex paint. Bob Mays sanded the front doors and applied 10 coats of marine varnish. Another parishioner had all hardware re-brassed in Bennington.”

The doors turned out to be gorgeous. There’s nothing like reclaimed wood with a thick coat of boat lacquer on it. Father said, “A lot of  love went into those doors.”

The transformation was impressive, no doubt about it. When we moved inside, I was wowed by the majesty of the little church. The stained-glass windows alone took my breath away.

Having been raised Irish Catholic, I do still have reverence for such things. It’s hard not to appreciate that well-appointed design in a church makes it easier to lift one’s heart in prayer. And if you are a believer, you think it shows honor and devotion to the Almighty. This is different from more austere religions but it’s the Catholic way — “an ‘incarnational’ or ‘sacramental’ way — worship aided by and expressed through material works of art”, Fr. Matthew explained.

Jim Tabor added, “The project [of working on the exterior] took over three weeks—but Bob Mays wasn’t finished just yet. He went on to remodel the Reredos [an ornamental screen covering the wall at the back of the altar] and moved the tabernacle to its new location.”

Father Matthew told me, “In the previous set up, the presider’s chair, my chair, was in the middle where the tabernacle is now. And the tabernacle was where St. Therese’s statue is off to the side. But we decided to make the tabernacle the focus of the church.”

In the Catholic religion, a tabernacle is a substantial furnishing or vessel that houses the Eucharist (the host) outside of Mass. The priest might need to use the hosts, for example, to distribute to the sick. But the bread has been consecrated and, therefore, considered to be the body of Christ, which is a miracle and so the vessel also protects the contents from sacrilege.

The scent of the old building, the crucifix and the statue of the Blessed Virgin Mary caused sense memories to erupt inside of me. How many days had I spent in such a church when I was a child? I could easily understand why the parishioners spent so much of their time preserving this old building. And, I must admit, the fact that this church is named St. Patrick, who is the patron Saint of Ireland, moved me.

According to research conducted by the late Eleanor Haskin of Waitsfield Telecom, by “1850, almost at the end of the famine, the Irish were the largest foreign-born group in Vermont, numbering 15,377. Although many had come in through Burlington, they’d often and quickly moved inland, with large Irish settlements in the railroad towns of Bellows Falls, Northfield, Rutland, and St. Albans. Craving both work and land, they’d found their way to places like Moretown, drawn there by the logging and the farming.”

Father Matthew had obtained history from the Diocesan Archives and he sent it to me. The documents record the first Mass of the parish as being celebrated on "Patty Hill"(also known as Paddy Hill), which is off South Hill Road. This was the home of many Irish immigrants to Moretown in the middle of the 19th century. And the first priest to celebrate that Mass in 1853 was Father O'Callaghan. O'Callaghan is an ancient and venerable Irish name. I was hooked on finding out more.

For the story of the history of St. Patrick Church in Moretown is the story of Catholicism in the state of Vermont itself. My husband will be quick to tell you when I spin a yarn it’s a long one. Of course! No one with a drop of Irish blood tells a quick story. Oh no, we must set the stage and provide detail. Especially one that features the history of the Irish people.

Thank you, Father Matthew, for taking us back. And thank you for all you do. But I am going to have to have a part two for this article. See you all next time.

Novelist Mary Kathleen Mehuron lives in Waitsfield. Reach out to her with story ideas at This email address is being protected from spambots. You need JavaScript enabled to view it..