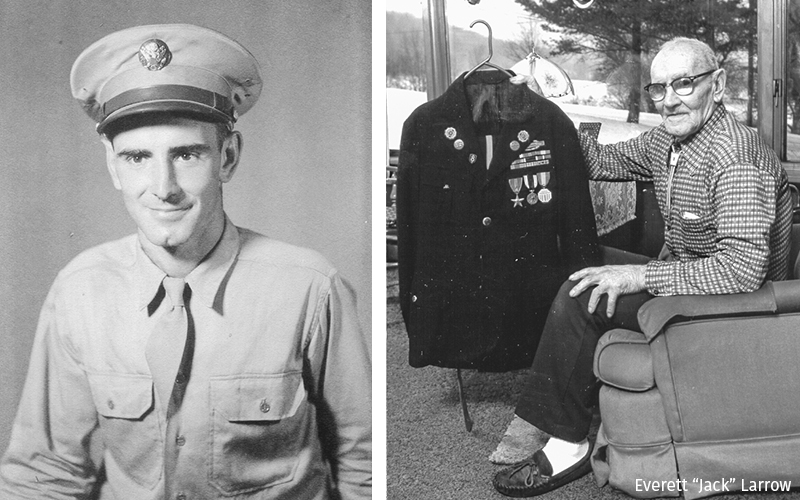 The late Everett “Jack” Larrow (1918-2004), who grew up in East Warren and graduated from Waitsfield High School in 1938, joined the U.S. Army in 1944 during WWII. He was deployed to Europe in May of 1944 and was captured by the German army in February 1945. He had a newborn daughter, Audrey, back home at the time, where his wife Jessamine was living with her parents in Waitsfield.

In a 1992 interview conducted by Jane Beck for the Vermont Folklife Center, Jack and Jessamine Larrow told the story of his capture as a prisoner of war (POW) shortly after the Battle of the Bulge. Jessamine received a telegram that Jack had been captured. “I don’t remember much about the day [she got the news], but as time went on, I didn’t hear anything, I didn’t hear anything.”

“I was a POW,” Jack said, “But at that time, they didn’t put you in concentration camps or anything. I just had to do what they told you to do. I wasn’t abused by them.”

Regarding his capture, he said, “It was on a patrol at night, the officer in charge was a little aggressive. Our assignment was to go to the top of the hill to see what was between us and other outfits and he took us right through the German lines and when we tried to come back to our outfit, we couldn’t. It was impossible. But I don’t regret any of it; I didn’t get abused. You didn’t get the best of food. But I survived it.”

Beck asked, “Were you scared?”

“Well yeah, a little bit. I trusted the German soldiers more than I did the older Nazis there. But they didn’t abuse me or anything.”

“Then you were liberated by American troops?” Beck asked.

“Not exactly, but I knew they were close and there were only five guys around me. The guy that was the guard of me had one of our service rifles. He was a medic and he wasn’t even supposed to carry a rifle. I didn’t think he knew much about it, so one day I said, ‘Well, I guess this is it.’ I got ahold of the rifle and him and took four other guys that had a mortar in place there — they were dropping mortars on the American troops — and we headed down the mountain, back over the hill and came to the 104th Timberwolf outfit. They asked a few questions and I finally convinced them I was a GI. Then after about another two weeks, they got me back to my own outfit. I was awfully glad to see American troops again.”

“Finally one night, about midnight when [my father] got home, the phone rang and they asked for me,” Jessamine said. “He said, ‘Well, she’s asleep but I will take the message,’ and no, they couldn’t give it to him, so he called, and I went down to the phone. It was Western Union and they said we have a telegram from the war department that your husband is back with his outfit. She said, ‘I’m not sure you’re getting this so I’m going to repeat it over again.’”

Asked if she had given up hope, Jessamine said, “Yeah. You do sometimes. When you don’t hear anything, you know, ‘cause you don’t know.”

Jack Larrow received the Purple Heart, the bronze star and was honorably discharged in 1946. Larrow’s military records were destroyed but, with the help of Senator Jim Jeffords, he was able to confirm in the late 1980s he had been officially declared a POW and attended a celebration in Vermont with roughly 70 other former POWs. He was assigned an “EX-POW” license plate. He managed the Floodwoods Farm in Waitsfield and was a groomer at Mad River Glen for more than 25 years.

Here is a link to the Vermont Folklife Museum website where people can search for Jack Larrow’s full interview.