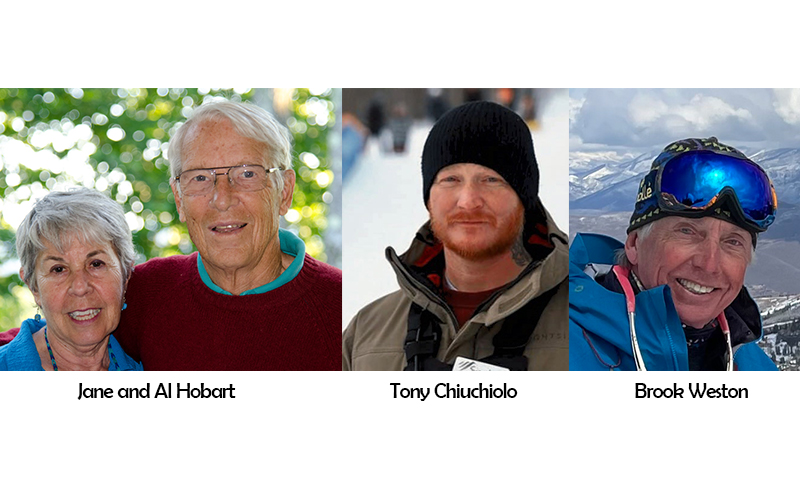 Sugarbush Resort is inducting three new members to its Wall of Fame this year. Similar to a Hall of Fame, Sugarbush’s Wall of Fame seeks to recognize some of the most significant contributors to the Sugarbush experience from 1958 to the present. The Sugarbush Wall of Fame was established in 2019 as part of the resort’s 60th anniversary celebration.

The Sugarbush Wall of Fame recognition is awarded annually to those who have made a significant contribution to “cultivating a spirit of lifelong adventure and camaraderie among Sugarbush staff, guests, and the community.”

Wall of Fame inductees are selected by the Wall of Fame review committee and the 2022 class includes: Al and Jane Hobart, Brook Weston, and Tony Chiuchiolo.

An alpine racer originally from New York City, Hobart moved to the Mad River Valley in 1963. When he arrived, he was an active racer in the Master's series, winning national championships in GS and slalom. After coaching the Valley Junior Racing Club from 1966 to 1972, he and fellow coaches went on to found Mad River Valley School, where he and his wife Jane welcomed students in their home in 1973 before expanding to other spaces. The academy would later become Green Mountain Valley School, with a full campus in Fayston, and would go on to include training facilities on Inverness at Sugarbush's Mt. Ellen, where it resides to this day. Since 1973, he has served as headmaster, a teacher, an alpine coach, and a trustee, overseeing all aspects of the school while Jane Hobart taught almost every subject and served as a college counselor. The Hobarts have served the school for 50 years and they remain deeply invested in its future.

Brook Weston was born in the Mad River Valley in 1955 to a then ski instructor at Mad River Glen. Each fall Brook would transfer schools to be at whichever ski area his father, Frank, was a ski school director. He eventually returned to The Valley in 1977 and landed a job in the repair shop at then Glen Ellen under the tutelage of Carl Ettlinger, owner of Vermont Ski Safety. After two years, Glen Ellen was purchased by Sugarbush Valley Corporation. and Weston took the job as manager of the repair shop at Sigi Sports where he would spend the next 15 years. When Les Otten purchased Sugarbush he decided to purchase real estate in Sugarbush Village where he started what is now known as Mountainside Ski Service. The ski shop celebrates its 27th year this season.

Tony Chiuchiolo grew up riding Sugarbush and its terrain parks, eventually joining the team in 2007. Tony became terrain park manager in 2008, holding the position until 2014 and transforming the program into one of the best on the East Coast. He helped build the Sugarbush Parks movement into a tightknit, yet welcoming community, expanding the operation across multiple trails and numerous events throughout the winter. He helped train the next generation of the park crew, leaving a legacy that continues on today. He also served as events manager afterwards, helping to strengthen relationships with partners and bring new events to the resort.

For more information on the Sugarbush Wall of Fame visit www.sugarbush.com.