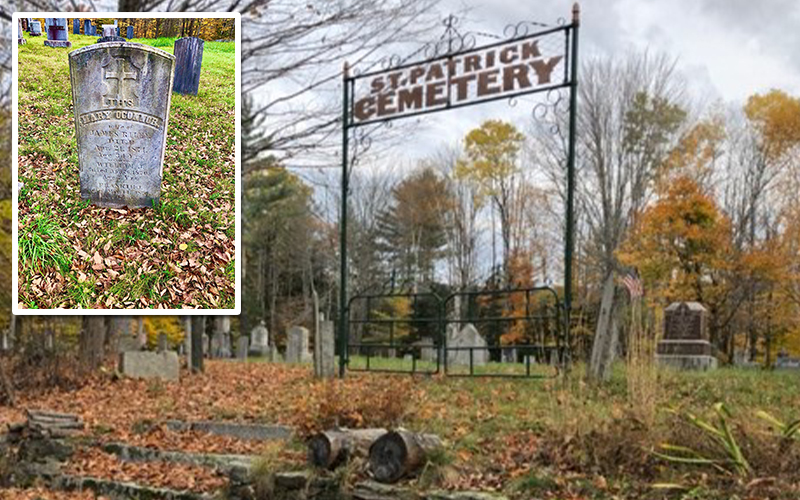 After writing about the renovation of our historic St. Patrick Church in Moretown, I yearned to know how the Irish immigrants that built the church fared as they arrived in The Valley after surviving both the Irish famine that killed millions and the passage across the Atlantic in “coffin ships”(Irish: long cónra). The ships were given this name because often a third of the immigrants who boarded such a vessel would die before they reached the United States or Canada. But at the time of the famine, when desperate and emaciated people were trying to escape poverty and starvation, the coffin ships represented the depths to which some people could stoop. Disregard for human life, pure greed and uncaring ignorance by the ship owners were common problems.

Not all the ships that transported Irish emigrants from their homeland to Canada and America were coffin ships. But many were unseaworthy and overcrowded with inadequate provisions of drinking water, food, and sanitation.

The group that made their way to the Mad River Valley and built a settlement on a mountain in Moretown has my attention. Surely it was a Herculean task. I wanted to walk in their shoes and contemplate the Irish Catholic experience in this cold and desolate part of the country. For you see, though the landscape of Ireland resembles Vermont, the weather is much more temperate over there. Ireland does not get the snow and ice that we do, nor the subzero temperatures.

Thanks to the emails I got after I put out a request for guidance on social media, I found St. Patrick Cemetery and pulled over on South Hill Road. This area is also referred to as Paddy Hill or Patty Hill (FYI: “Paddy” is short for Padraig, the Irish for Patrick. To call someone a Paddy is an ethnic slur. You don’t want to use it when addressing an Irish person.).

You cannot imagine my surprise when I saw the headstone of Mary O’Conner. O’Connors have a royal blood line. Their family history goes back thousands of years in Ireland. The last thing I expected in this seemingly abandoned graveyard in the middle of nowhere was a woman descended from kings.

She was a married woman; it says so on her gravestone. Yet her maiden surname of O’Connor is prominently carved on the marker of her grave. In a more shallow font the inscription reads, “wife of James Riley.” That strikes me as unusual at a time when women were subservient to men. The Riley surname isn’t the name of a commoner either. It originally appeared in Gaelic as O’ Raghailligh, which means descendant of Raghallach. You can see by the spellings how different the Irish language is from English. So Riley, even though the name was Anglicized, is a fine old Irish name. But it does not have the stature of the family of O’Connor. Not even close. My hypothesis is that her surname is featured because the entire family was proud of that name and proud of her as well.

And what else do we know about Ms. O’Connor? She is buried with two of her children who died in the same year — 1870. A year before their mother. Some Irish Americans say that two children born in the same year are Irish twins, but we have no name for those who die in the same year. It boggles the mind. The older of the boys was William. He was born on Valentine’s Day in 1868 and died at 2 years old in April. The younger child is given as Frankie on the headstone, but a Clark family tree lists his name as Jeremiah Francis. He was 6 months old when he passed. My eyes tear up at the thought of it, for there was a diphtheria epidemic at the time.

Some of the men on Paddy Hill worked in Northfield. From the Spike 150 website: “Ireland and North America have had an unending connection since the first Euro-American settlements. Many Irish were builders of roads, canals and bridges, including the Erie Canal. In mid-1840s potato famine prompted waves of emigration to the United States. In their home country the Irish had been prohibited from voting, owning land or holding public office. In the U.S. they faced discrimination due to their religion (Roman Catholic), language (Irish) and limited work experience. Despite this, over 150,000 fought in the Civil War (1861–1865) and 8,000-10,000 labored on the transcontinental railroad. Seeking a better life, the Irish offered theirs skills and their strength, serving as engineers, managers, masons and laborers on both the Central Pacific and the Union Pacific railroads. The Irish helped build the nation we know today.”

The men of Paddy Hill who worked in Northfield worked for Central Vermont Railroad. The northeast corner of the St. Patrick Cemetery looks to be empty, but it is really a mass grave filled with those workers who caught and died from diphtheria. The bodies were carried back to Moretown in the middle of the night to be buried in unmarked graves because of the fear and stigma during the epidemic. So it is possible that Mary O’Connor and her two babies died of diphtheria too.

In the 1870s the disease was characterized, as far as children were concerned, as the Strangling Angel of Death. It is a bacterial infection and there were no antibiotics back then and, therefore, no cure. It had become a major cause of mortality. The origin of its name is from the Greek word for “leather,” which describes the coating that appears in a sufferer’s throat across time. The inability to breathe could become so severe, if a doctor with training was available, the doctor would perform a tracheotomy by cutting a hole in the patient’s throat. For Mary to watch her children die this way would have been horrible. And it was tragic that she, herself, would pass away at only 34 years old.

Mary’s life wasn’t always a nightmare. Jason Clark’s family tree says she was born in Ireland in 1837 and married James, in Canada I believe, at 26 years old in 1863. Her first son Dennis was born in 1864, then Michael in 1866, and William James in 1868. Three sons. In that day and age this was a sign of good fortune.

But after the births and, in quick succession, the deaths of William and little Frankie, she must have been devastated. Was she thrilled to become pregnant again? She gave birth to another boy on April 12, 1871. The tiny infant was to be the “Named Son” of the family, who would carry on his father’s name — James M. Riley.

Mary O’Connor died nine days after her baby’s birth in Warren, Vermont. Death from complications due to childbirth was very common then. Perhaps, she died from infection or bleeding from the birth instead of diphtheria.

Little James would live to be 46 years old. His father passed in 1924, at the ripe old age of 83. His big brother Dennis was 48 when he died, and Michael was 63. The life expectancy for a man in this time was about 43 years old.

The author of the Clark Family Tree indicates that he is descended from Dennis Riley and other settlers of Paddy Hill as well.

You can find St. Patrick Cemetery located on the east side of the South Hill Road in Moretown, VT. From Moretown Village, go up the Moretown Mountain Road approximately 0.9 miles to South Hill Road, turn right and go south on South Hill Road about 0.5 mile to the cemetery.

The graves were read moving front to back by Robert Morse in August of 1999 and made into a book. I have a digital copy of his list of the names on the graves that are marked. If you would like to see it please email me at This email address is being protected from spambots. You need JavaScript enabled to view it. and I will send it to you. And if you have any information about any of the departed, please let me know.