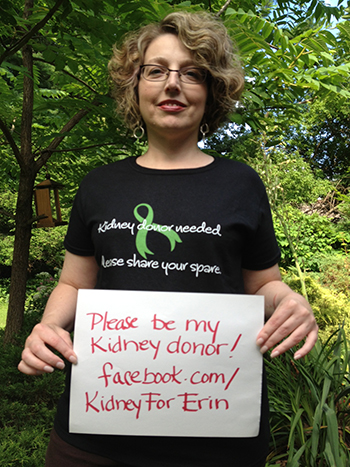 Former Valley resident and Warren Select Board member Erin Russell-Story is looking for a kidney donor. She has been diagnosed with an autoimmune disease that has caused kidney failure.

During a trip to the mountains of Colorado in October 2012, she began experiencing swelling and shortness of breath. Altitude sickness was blamed for the symptoms.

However, when she and her husband Dan returned to their home in Pittsburgh, the symptoms didn't go away. Then intense back pain set in, which prompted a trip to the emergency room. A few routine tests determined that Erin's kidneys were failing, but the important question was why? She was admitted to the local hospital and doctors spent the next week trying to determine what was causing her kidney failure. Biopsy results showed that she has rapidly progressive IgA nephropathy, an autoimmune disease that causes a person's body to attack their own kidneys. After almost three weeks in the hospital, she got to go home just in time for her 47th birthday, but with only 25 percent of her kidney function.

During the following three months she held to a very strict diet, limiting her fluid and protein intake, taking very high doses of prednisone, and even trying three rounds of chemotherapy, all in hopes of arresting the disease and saving her kidney function. None of the treatments worked and she had to start dialysis in February of 2013.

While dialysis is saving her life, it brings many challenges, inconveniences and sometimes even pain. Since May of 2013, she has been able to do a type of treatment called peritoneal dialysis, which she can do at home instead of having to go to a dialysis center three days a week. The downside is that the treatment must be performed four times per day, every single day. Russell-Story and her husband had to go through special training to be able to do this treatment on their own. She uses 120 two-liter bags of dialysis fluid every month to stay alive.

There is no cure for IgA nephropathy and dialysis is the only treatment for End Stage Renal Disease (ESRD). Without treatment, ESRD is fatal. Even dialysis can't keep an ESRD patient alive indefinitely. Her best hope for returning to a normal life is a kidney transplant. She is on the waiting list at the Cleveland Clinic (her insurance doesn't cover any transplant hospitals in Pittsburgh). The wait time for a kidney from a deceased donor is three to five years. While on its face that wait time may not sound too bad, the reality is that having ESRD and being on dialysis is shortening her life expectancy significantly. Some studies indicate that a person starting dialysis in her 40s can expect to live only five to seven years on dialysis. A kidney transplant offers significant hope for a longer and healthier life.

Russell-Story is actively searching for a living kidney donor. One kidney can be donated with no long-term adverse effects to the living donor. More information about living kidney donation is available from the National Kidney Foundation at www.kidney.org/Transplantation/LivingDonors/index.cfm.

To be considered for kidney donation for Erin Russell-Story, call the Cleveland Clinic Living Donor Office at (800) 223-2273, ext. 53150. People can follow her on her journey through kidney failure and her quest for a transplant at www.facebook.com.KidneyForErin.