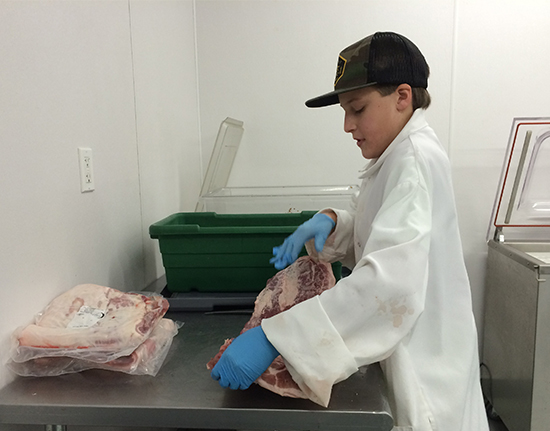 Henry is currently completing an internship with Artisan Meats of Vermont as part of Harwood Union's multi-pathways learning program, which sets students up with real life educational experiences in the local community.

Henry chose to work with Artisan Meats of Vermont, which leases production space in the Waitsfield facility, because "I want to be a butcher when I grow up," he said. Well, sort of. "I want to have my own sandwich shop," Henry explained. "And I thought it'd be really cool if I made all of my own meat.

For Henry, coming to the Food Hub on Tuesdays and Thursdays "is really cool, because I get to do what I want during the school week," he said. So far, Artisan Meats of Vermont co-owners and brothers Jacob Finsen and Justin Finsen have taught the 14-year-old how to season, link and package sausages, as well as "a lot about being sanitary and clean," Henry said.

Because Artisan Meats of Vermont is a small, independently owned company, Henry has been able to have a really hands-on experience at the Food Hub, Jacob Finsen explained. "What Cole's doing here, he wouldn't get to do at a larger meat packing plant," he said, and unlike Artisan Meats of Vermont, "Not a lot of butcher shops do whole-carcass breakdowns anymore."

Artisan Meats of Vermont sources its pork from small farms throughout the state, including the Waitsfield-based Vermont Whey Fed Pigs, and "This is the time of year when everybody's slaughtering the family cow, so to speak," Jacob Finsen said. Last week, Henry helped the Finsen brothers process 440 pounds of pork and this week they're working on even more.

Last year, Artisan Meats of Vermont was contacted by a teacher from Harwood Union High School to have a different student come intern with them, but this year "Cole called himself," Jacob Finsen said. "He knew what he wanted to do and we've really loved having him here."