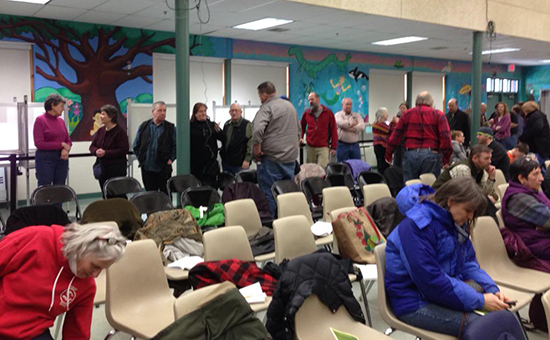 After eight and a half hours and multiple paper ballots, the gavel banged and Duxbury's Town Meeting ended.

The marathon meeting included select board member Mo LaVanway tendering his resignation over a political email circulated to voters prior to Town Meeting and select board chair Dick Charland rejecting a nomination for re-election.

With LaVanway's resignation and Charland rejecting the nomination, voters had their work cut out for them, ultimately adding two new members to the board and re-electing Marty Wells and Amy Scharf.

The day started out with a paper vote as voters motioned to skip over Articles 1 through 8 so that voters could discuss Article 9, which called for select board meetings to be recorded and made available to residents. The town select board got itself in hot water with this article on the Town Meeting warning because the board appended commentary to this article in the warning, which is a violation of state statute that will require another meeting be held to ratify any decisions.

A motion was made to pass over this article, which went to a paper ballot and failed as it did not receive the two-thirds majority it needed. During discussion of this article voters asked what harm there was in recording meetings and pointed out that other neighboring towns do it. Others said they felt it would lead to people not attending select board meetings. After further discussion voters amended the language of the article from "require recording" to "request recording." That motion passed, the first of the meeting, at 11a.m.

Voters moved on to Article 10, which included the town budget and the board's second attempt in two years to cut town clerk Ken Scott's wages. This year the board proposed cutting his salary from $36,000 to $24,000. A motion was made to restore his wages to the 2014 level. This prompted LaVanway to tell voters that the salary was lowered because the position used to be treasurer and town clerk.

LaVanway told voters that this proposal was not a vendetta; he said the town clerk's job was now a three-day-a-week position. A voter suggested that the board make this salary cut in a year when the clerk was up for re-election and see if anyone would run for the job.

Scott was asked about his hours and reported that he was open and busy four days a week during February, which is normally a quiet month. The select board was asked how Duxbury town clerk wages compare to neighboring towns and voters heard that clerks in neighboring towns are paid more. The question of whether to restore Scott's salary went to a paper ballot which passed 63-45.

After lunch, voters moved on to electing town officers, which led to more paper balloting. Finally, with all officers elected, voters moved back to articles they'd skipped over in the morning, including an article calling for the town clerk and treasurer positions to become one- year terms instead of three-year terms. That was voted down, 49-48, and Beth Wilbur was nominated and elected as town treasurer.

Voters took up Article 5 which called for the town to borrow $72,000 a year to pay for debt the select board said was leftover from 2013. This was the subject of three special meetings last year with former town auditor Bill Yacavoni reporting that the debt didn't exist and the board insisting it did. Voters borrowed the money in 2014, but this year debated whether it was wise to borrow the money.

The motion was amended to borrow the funds for one year only and a resident questioned how it was that the town ended the year with a $300,000 surplus if indeed the debt existed. Voters ultimately voted to pass over that article entirely. That passed by a hand vote.

Voters approved spending up to $50,000 from the Capital Reserve Fund for road work and also approved the purchase of a 2015 Freightliner tandem truck for $198,000. Voters gave the select board the OK to pursue two parcels of state-owned land in Duxbury.

Duxbury volunteer journalist Molly DuBois, with her newborn strapped to her chest, tweeted Duxbury's Town Meeting for The Valley Reporter and several residents provided text and email updates throughout the day.