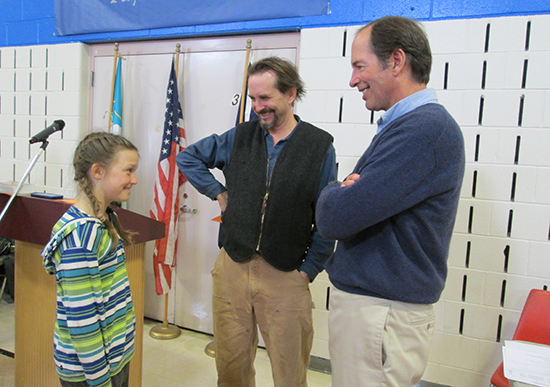 Fayston voters were very interested in one Town Meeting article calling for hiring outside assessors versus using the town's listers to appraise property in the town. On March 3 during Town Meeting, voters moved smoothly through their Town Meeting warning, re-electing Dave Jones as moderator and Patti Lewis as town clerk.

Some 65 people participated during the day at Fayston Elementary School where the meeting was held. Fayston has 1,084 registered voters and 117 of them showed up to vote by Australian ballot on the Harwood Union school budget.

Voters heard from Jared Cadwell about the impacts of the state's new composting/recycling regulations and also heard from state Representatives Adam Greshin (I-Warren) and Maxine Grad (D-Moretown) about their work in the Legislature this year. Greshin outlined his work on education funding and explained a bill that passed last week with the potential to impact school budgets and tax rates. He also explained the Legislature's work on cleaning up Lake Champlain.

Grad told the voters about the sex offender release bill that she had authored and which was signed into law last month. It requires sex offenders to register with the registry when they are released from prison versus three days after.

Voters spent a fair amount of time discussing an article to increase the fee the town pays to the school for community usage of the facility from $20,000 to $40,000, which increased the town's budget by $20,000.

Longtime lister Gussie Graves told the town about her intention to retire, leading into the discussion of whether town listers should continue to assess property or whether the town should hire outside assessors to do the work.

There was support from the select board for keeping the work in-house, although there was also discussion about the value of following other towns in hiring outside professionals to do the work. Ultimately voters amended the wording of the motion calling for the town to use outside assessors in 2016, calling for the change to be made if it was deemed necessary by the select board.