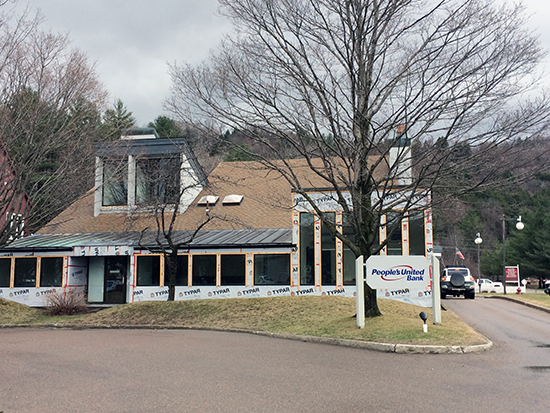 The Waitsfield Select Board is going ahead with plans to build a new town office at the Farm Stand site but will gather more specific financial data about the costs of purchasing the People’s United Bank building as an alternative.

The board, at a standing-room-only meeting on May 11, unanimously approved a motion to continue work on building at the Farm Stand site after an amendment to the motion called for getting better cost figures for the bank.

Two weeks ago the select board received a petition calling for the town to pause in its efforts to build a new town office in favor of considering the bank. The bank building is in the Mad River Green Shopping Center and will become vacant in July.

LOOKED AT THE BANK

At this week’s meeting, Henry Erickson, a professional commercial estimator from Warren who volunteered his time to take a look at the bank and assess what it would cost to turn the building into a town office, explained what he found.

Erickson said he and architect Bill Gallup, builder Tom Buckowski and a select board member and others went to look at the bank last week.

“We did a walkthrough of the building with the manager. Bill measured things for dimensions and we talked about what would have to happen. The envelope of the building is 2-inch-by-4-inch construction with fiberglass insulation. That doesn’t meet the current code for public buildings. Half of the windows have been replaced and half need to be replaced. The roof, from observation from the parking lot, looks to be in rough shape,” Erickson said.

NOT A COMPLETE REDO

“The interior, at a minimum, would require ripping out the teller area so it could be reworked to usable space. There’d have to be some mechanical and electrical work in the area. The HVAC system’s ductwork is in the sub-slab and the air supply comes up through the floor. We’d have to investigate to see if there is asbestos in that,” he continued.

“Based on my experience and average costs, it looks like to do the minimal work to get the building renovated and upgraded would cost $80 to $100 per square foot, so about $268,364 and that’s not a complete redo,” Erickson said.

Erickson said that if the town were to pursue the bank, the bathrooms also need to be upgraded to be handicapped accessible and he said that it made the most sense to complete all renovations before moving in.

LESS OF A BARGAIN

Erickson also explained that in addition to an anticipated $300,000 to $400,000 in remodeling costs, the bank is paying $15,000 per year in common area maintenance fees to Crosspoint Associates, owner of the shopping center. Those fees plus the $600,000 to $700,000 cost of purchasing the building, make it less of a bargain than petitioners expected.

“What concerns me, the renovation costs are a given, it’s the $15,000 a year in association fees to do work that we, as a town, already have people to do. We have a road crew to plow and maintain our sidewalks. That’s just added costs,” board member Logan Cooke said.

“I think we’ve done what this petition asked for and I’d hate to take any more time on this. I’d like to make a motion that we move forward with our plans to build a new town office at the Farm Stand,” board member Scott Kingsbury said.

Before and after his motion was seconded, townspeople commented on the bank versus Farm Stand site idea.

“This bank building represents a lot more positives than your assessment reports. Yes, it needs roofing, siding, windows and a few other things. It’s got great lighting and it’s in the center of the shopping center. It would let people see our town offices while getting mail and shopping. There are four people who are going to be working there plus the listers and people looking up documents. It’s got a very workable vault and a cash room in the back. It is in the center of activity and not at the far end of town. Building a separate building at the far end of town doesn’t suit anyone except four people. It’s time to get off your high horse. Renovating this building isn’t going to cost nearly as much at the $1.5 million new building,” said Marie Leotta.

Chessie Stevenson, who lives on Brook Road, suggested that all negatives or costs associated with the bank were positives and that the board should “imagine that this is something you really, really want. Pretend that you want it and see how that feels.”

SKIN IN THE GAME

Erickson said that he lives in Warren and doesn’t have skin in this game. Stevenson said that at a minimum the town should get complete figures on the cost of the bank.

“We will be reasonable about that when we see it,” she said.

PULL OUT A SPREADSHEET

“I’d like to continue what you’re saying,” Ted Laskaris said. “I think I have an idea of what the initial cost of the bank and running it out over 30 years would be. I think the bank would be more expensive, but I’d like to see someone pull out a spreadsheet and make the comparison.”

Pete Reynells asked how the cost of building at the Farm Stand site could be reduced to $1 million versus now a projected $1.6 million. Board member Sal Spinosa said that the town had applied for additional grant funding to cover an additional $225,000 in costs. The town has a $750,000 grant, plus voter authorization to borrow up to $650,000 and the town received a $100,000 donation of the land for the Farm Stand site.

Spinosa told Reynells that if additional grant funding is not available, the town will cut the proposed project.

If the town were to pursue the bank, it would have to return its $750,000 and reapply for it as that grant is specific to the Farm Stand site proposal.

Former select board member Charlie Hosford said he favored staying the course with the Farm Stand site, citing its proximity to the Flemer Field, the school, the fire station, the medical center and the ambulance service. Jack Simko urged the board to look at the new town office as a building for the next 100 years and said that it would allow room for growth, which the bank would not.

“The town has voted on the Farm Stand site and we have a done deal. We have grant money that may or may not disappear if we change. We ought to stay with what we voted,” said Stan Needleman.

After the board amended the motion to include having Capels gather and make available full costs associated with the bank, the question was called and the motion passed.