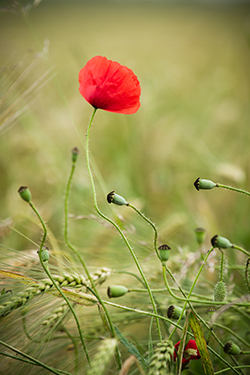 Warren resident Marion May Snow wants people to remember Moina Michael, the woman who pioneered the idea of using poppies as a symbol of remembrance.

"I'm not going to tell you how old I am, because I'm not old. But I will tell you that I've celebrated 91 birthdays," Snow said this week.

Snow has been very active in the American Legion Auxiliary over the years and a strong proponent of the red paper poppies, which were regularly distributed throughout The Valley.

Snow, who reports that she has never voted anywhere other than Warren in her entire life, came to Warren with her parents in 1929 when they accepted the job of carrying the mail by horseback over the Roxbury Gap.

She is a member of the Barre branch of the auxiliary as well as the liaison between Warren and Waitsfield United Churches of Christ.

The first poppy lady, May explained, wrote a poem, "We Shall Keep the Faith," that includes this version.

"And now the Torch and Poppy Red, we wear in honor of our dead.
Fear not that ye have died for naught; We'll teach the lesson
That ye wrought in Flanders Fields."

Her poem was inspired by the poem "In Flanders Fields" by John McCrae which opens with these words:

"In Flanders fields the poppies blow
Between the crosses row on row."

That poem expresses the sentiment that Snow wants people to remember this Memorial Day.

Moina Michael, who lived from August 15, 1869, to May 10, 1944, was an American professor and humanitarian who conceived the idea of using poppies as a symbol of remembrance for those who served in World War I.

After the war was over, Michael returned to the University of Georgia and taught a class of disabled servicemen. Realizing the need to provide financial and occupational support for these servicemen, she pursued the idea of selling silk poppies as a means of raising funds to assist disabled veterans. In 1921, her efforts resulted in the poppy being adopted as a symbol of remembrance for war veterans by the American Legion Auxiliary.