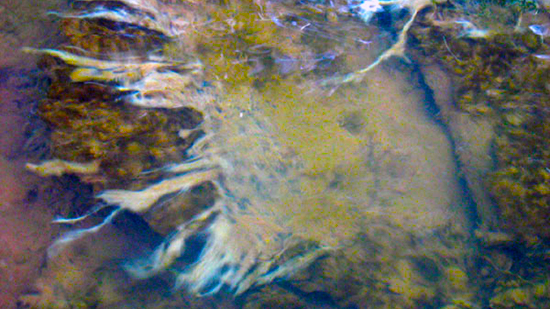 With temperatures tipping into the 80s over the past two weeks, Valley dwellers flocked to the swimming holes, taking advantage of the cool, (mostly) clear water. And, with the cooperation of the community, one local organization hopes the river can stay that way.

In 2008, Friends of the Mad River discovered a yellowish, seaweed-like substance floating in the water just downstream of Warren Village. At the time, they thought it was invasive, “but we think now that it’s been here for a long time, and we only just started seeing its blooms,” Friends of the Mad River director Corrie Miller said, explaining that some scientists believe its recent appearance could be a result of changing climactic conditions.

Didymosphenia geminata, commonly known asdidymoorrock snot, is a species ofdiatomthat produces nuisance growths in freshwater rivers and streams with fast-moving water. It usually starts to form blooms in the mid to late summertime, just as paddlers and swimmers are starting to enjoy the river, and while “we aren’t sure it’s invasive, we are sure it’s a nuisance,” Miller said.

In addition to being unappealing to see and touch, didymo is a hassle for fishermen, who have to clean the slimy substance off of their fly every time they cast it. On an ecological level, didymo disrupts fish habitats and in some cases blocks them from finding their food.

Since 2008, didymo blooms have been discovered in other parts of the Mad River, mostly between Warren Village and Lareau Swimming Hole in Waitsfield. While scientists are not entirely sure about the origin of didymo, Friends of the Mad River is trying to prevent its unnatural spread.

Humans can spread didymo between rivers and streams via their clothing, shoes, boats, paddles or any other type of gear. “If you take a kayak from one place to the next and don’t wash it off, it could easily spread,” Miller said of the diatom.

In order to avoid introducing didymo to a new water source, anglers and paddlers should clean their gear thoroughly with a dishwashing detergent or bleach solution after each use and let it dry for at least 48 hours, as the diatom can only live in wet conditions.

For more information about didymo and how to prevent its unnatural spread, visit watershedmanagement.vt.gov/lakes/htm/ans/lp_didymo.htm.