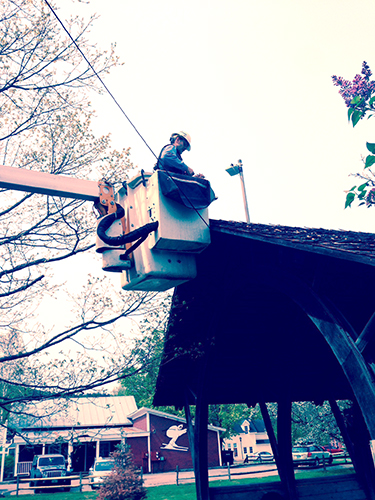 The access also allows vendors to use handheld devices for credit and debit card transactions using Wi-Fi versus data.

The creation of future Wi-Fi zones for other common areas throughout The Valley area is also under way. Right now there is no password. Later there may be a sign-in mechanism.

“The next steps are to scout out additional locations on The Valley floor. The Wi-Fi is not intended to replace the wired broadband infrastructure that we have invested heavily in but instead is designed to extend the value of that service outside of the home/business and provide value to both local community members as well as visitors,” he continued.

“While the technical people are working to build the captive portal and authentication mechanism (that will be the way that people sign in) it’s still in the works. Each access point costs around $1,200 and then connects back via fiber-optics to a centralized controller that manages the Wi-Fi network. The access point on the Mad River Green serves the farmers’ market area (to give you an idea of how much of an area a single access point serves),” Gruendling continued.

According to Gregg Haskin, president and CEO of WCVT, “These Wi-Fi zones are designed to extend the value of our high-speed Internet service outside of our customers’ homes and businesses and provide value to both local community members as well as visitors.”\

The Community Collaboration Challenge recognizes companies for the development of broadband-enabled solutions for their communities. WCVT hopes to use this project as a model to roll out community Wi-Fi zones in other towns in their service territory and eventually expand the Mad River Valley Community Wi-Fi zone to cover a larger footprint.