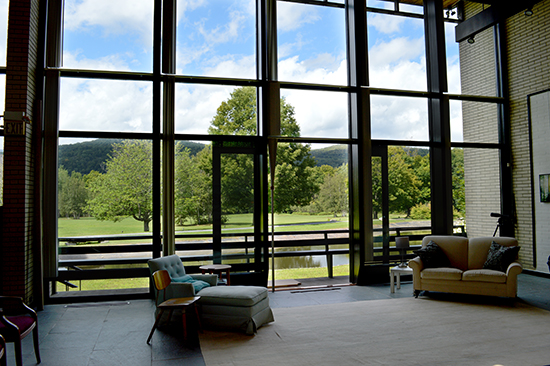 June and Wendell Anderson purchased the Bundy Gallery in Waitsfield in January 2014 and transformed it into a thoughtfully created residence for themselves and their kids, while maintaining public gallery space and respecting the architectural style in which the landmark building was constructed.

The 5,000-square-foot building is all square angles, steel beams (huge ones) and long views through huge windows with expansive views in every direction. Inside, it is like an industrial warehouse with exposed HVAC components. There are brick walls, cement floors, carpeted floors and wooden floors. And windows. Windows everywhere. Huge windows, wide windows, tall windows, transom windows on top of things and along the floor. 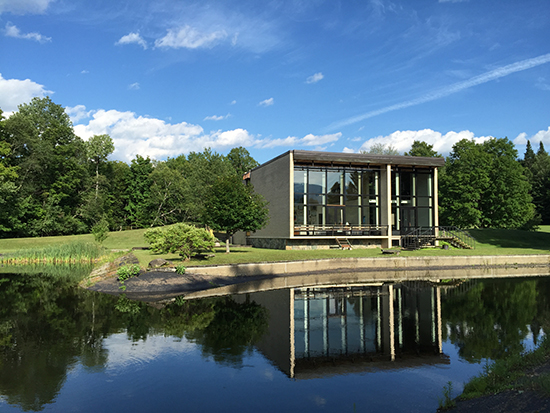 When built in the early 1960s it was ultra-modern for the time. Its flat roof and almost square shape are in sharp contrast to the rolling green lawn that it sits on. The open space is part of 80 acres at the end of Bundy Road.

Since its creation as an art and sculpture gallery in 1962, the space has functioned as an art gallery, school space, a wedding venue and a venue for musical events (who remembers the summer that The Rocky Horror Picture Show played every Saturday night after midnight featuring Rusty DeWees as Brad?). The space has been used for offices, has hosted the Mad River Chorale and seen a variety of other uses come and go.

It featured a commercial scale kitchen, a second floor with two levels and very few walls, a lower floor, a basement and the main gallery space when the Andersons bought it. They made some very artful changes to the space, creating personal living space that works as part of the gallery’s personality and style.

HOLE IN THE WALL

They cut a hole in one wall of the new kitchen space, a huge hole to create a view into the entrance of the gallery and a view to the meadows and mountains beyond. The piece of wall that they cut out was repurposed into a tall table in the kitchen. Working with salvaged goods and Ikea and Warren Pieces they put together a functional, well-lit kitchen that speaks to the vernacular of the space around it.

Wendell acted as general contractor for the project, working with Matt Groom and Whitney Phillips of Warren Pieces and they also worked with a designer but only on ideas and only briefly.

They also worked with Brad Cook of Building Performance Services on ways to improve the energy efficiency of the space. They replaced some of the huge windows in the gallery space that were clouded.

“We tried to strike the right balance between the public and private with the work we did. This space needs to be a gallery and should be used as a gallery,” Wendell said. They can partition or curtain or close doors to keep their spaces separate from the gallery and to avoid heating the huge, high-ceilinged gallery in the winter months.

They restored the main gallery room, preserving its architectural impact and integrity while they were carefully crafting their personal space around the gallery. The gallery reopened last month as The Bundy Modern. In addition to the public gallery space they share with the community, they donate training space to the Green Mountain Valley School Nordic and biathlon teams so they don’t need to drive an hour each way.

At the back of the public gallery space, which currently features the oil paintings of Julia Purinton and some of Wendell’s collectable motorcycles, plus a divan, conference table and architect’s table, are stairs to the second floor. The stairs are wide and made of wood with black steel handrails on both sides. They lead to a 1,200-square-foot living and sleeping space for the family.

The same industrial theme is followed on this floor. There is exposed duct work, painted brick walls, huge windows. They carefully carved out two bedrooms, a bathroom and closets for their kids, neatly severing a wall of windows with the bedroom walls, including transom lights in the kids’ rooms that echo the transom lights in the rest of the space. In their daughter’s room the wood on the floor runs at a diagonal contrasting with the horizontal wood on the walls. Both rooms feature a cozy book nook with a sprawling chair against the window wall. A book-lined half walk looks down into the gallery and out to the views from the public space.

“We had to really listen to the building while we were creating this space. We had to make sure the work we were doing was right for what this building is,” June said.

Another small set of stairs leads to the master bedroom where a similar half wall looks out into the gallery space and its views, plus an enormous skylight is positioned over the bed. The room features a small deck with fire escape-style steep steel stairs leading a long way down.

Back on the first floor, beyond the mudroom is a space that features more windows and steel, motorcycles, a brick red wall, more steel, some workroom space, a laundry room and around a corner a home office with a wall of windows and shelves of paintings.

There are wide steps to what used to be the public bathrooms for the gallery, a men’s and women’s bathroom, one replete with a urinal. Beyond that is mechanical space plus a huge family storage area.

Back in the gallery, June explained that they found the hangers for the artwork, which slide or clip over the lip of exposed metal 15 feet up, in a corner and contemplated throwing them out, but then realized their purpose.

The Andersons had bought and fixed up homes in need of work while living in them in the past and while a little daunted at the scale of the Bundy, completed the work in a few months, moving into their new space in October. Wendell, himself a builder, has plenty of experience as a general contractor and home rehabber and June brought real estate experience to the project.

It’s obviously a gallery, but now it is also their home. Wendell was changing the oil in one of the cars before the interview and afterward left to cut the huge lawns – something he said he does a lot. June, when complimented on the effect of a row of car keys hanging by the door of the mudroom, laughed and said that it was her idea and when she looked at them, she could see who was home. Their daughter, Callie, 17, goes to Harwood Union and their son, Henry, 20, attends UVM.

Nina, the family dog, roams from room to room, her escape to the outside through the many open doors blocked by a baby gate in one room and a sideways door in another. A large, black cat roams freely, coming and going from the fire escape stairs in the master bedroom.

There’s a pair of waders hanging near the gallery space and a pogo stick in the back corner of the gallery space. It’s hard to determine what is part of an exhibit and what is an artifact of family living.

And that’s exactly what makes their renovation work!